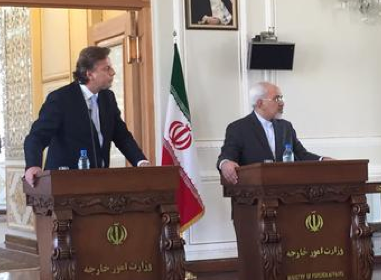 Iran is keen to leave the past behind and restore the good relationship it had with the Netherlands, Iran’s foreign affairs minister Mohammed Javad Zarif said on Sunday during a meeting with Dutch foreign minister Bert Koenders in Teheran.

Koenders arrived in Iran at the weekend in what is the first visit by a Dutch minister in 14 years.

According to the NRC, Zarif said the oil and gas industry, water sector and farming are all areas which offer prospects to Dutch companies. He also said he regretted the fact that the long relationship between the two counties had suffered because of sanctions.

According to news agency ANP, the two countries have had a diplomatic relationship for 390 years.

At a press conference after their meeting, Koenders said the Netherlands is keen to strengthen economic, political and cultural ties between the two countries ‘on equitable terms’.

In addition, he said that Iran is ‘indispensible’ in a ‘very difficult region in which we have to find peace and stability’.  ‘I also welcome the involvement of the Iranian government in trying to engage in productive talks… on issues like Syria and Yemen,’ the Dutch minister said.

Zarif also said the Netherlands will have an important role to play in the implementation of the newly-signed nuclear agreement in its role as president of the EU in the first half of next year, the NRC reports.