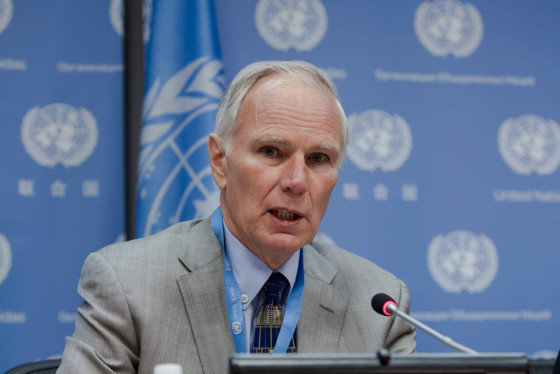 The United Nations’s special rapporteur on human rights has condemned the refugee bed and board deal agreed by the Dutch coalition government, saying it is an infringement of basic human rights.

Philip Alston, a human rights lawyer who has worked for the UN for 20 years, told Radio 1 news the agreement will damage the reputation of the Netherlands abroad.

‘If the Netherlands is going to turn itself into an island in the middle of Europe which rejects its human rights obligations it is better to come out and say it,’ Alston said.

‘Why try to continue to be the home of international law and tribunals and so on? Why try to become a member of the UN security council. Just come out and say it: we don’t believe non-Europeans have human rights. At least not in our country.’

The deal involves replacing the current informal network of emergency shelters with five centres in the big cities where undocumented refugees can stay for a ‘few weeks’ on condition they cooperate with their deportation.

Those who refuse, or say they cannot go back to their home country, will not be allowed to use the shelters. In addition, the government will cut the budgets of councils which continue to offer them housing.

‘These people who are fleeing terrible conditions in their home countries… are being treated as if they are thieves and robbers, trying to take something from the Dutch people, rather than being given their human rights,’ Alston told the broadcaster.

He has promised to raise the issue within the UN.

The  controversial agreement was thrashed out between the opposition parties in a week of intense talks after the Council of Europe said the Netherlands did have to provide basic food and shelter to failed asylum seekers.

Local authorities across the country have said the deal is unworkable and will not solve the problem of failed asylum seekers being homeless.

A group of around 100 have been squatting in various abandoned buildings in Amsterdam since 2012.