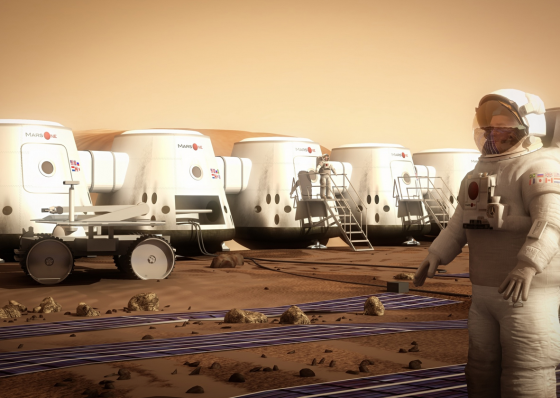 A small Dutch company which has gathered global publicity for its plan to send six people to Mars to set up a colony may be ripping off its supporters, according to website Matter.

One of the 100 finalists for the project told Matter that the leading contenders for the mission had bought their way into that position and that the interview procedure was far from adequate.

In addition, hopeful Mars colonisers are being urged to donate appearance fees back to the project. And last month the Nobel laureate Gerard ’t Hooft , listed as an advisor to the project on the website, said it would take 100 years to launch a manned mission to Mars, not just 10.

Despite being one of the finalists, Joseph Roche, who is an assistant professor at Trinity College’s School of Education in Dublin and has a PhD in physics and astrophysics,  told Matter he had not met anyone from the team in person.

‘They made us sign a non-disclosure agreement if we wanted to be interviewed, and then all of a sudden it changed from being a proper regional interview over several days to being a 10-minute Skype call,’ he told Matter.

In February the finalists received a list of ‘tips and tricks’ for dealing with press requests, which also stated: ‘If you are offered payment for an interview then feel free to accept it. We do kindly ask for you to donate 75% of your profit to Mars One.’

Researcher Elmo Keep, who has followed the story from the beginning, says the Mars One project has almost no money, no contracts with private aerospace suppliers and no television production partner, now Endemol appears to have pulled out. Keep also says that 200,000 people did not apply to join the mission, as claimed and just  2,071 paid the registration fee.

According to the website, the Mars One project is run by a foundation (stichting) and is a not-for profit organisation.

However, chief executive Bas Lansdorp and chief technical officer Arno Wielder are also the owners of a limited company, Interplanetary Media Group BV, based at the same address in Amersfoort. It has just three employees, according to Dutch chamber of trade filings, and has not filed its 2012 or 2013 accounts.

According to the Mars One website, the project had raised some $760,000 from donations and merchandise sales – before costs – by the beginning of this year..

‘My nightmare about it is that people continue to support it and give it money and attention, and it then gets to the point where it inevitably falls on its face,’ said Roche. If, as a result, ‘people lose faith in NASA and possibly even in scientists, then that’s the polar opposite of what I’m about.’