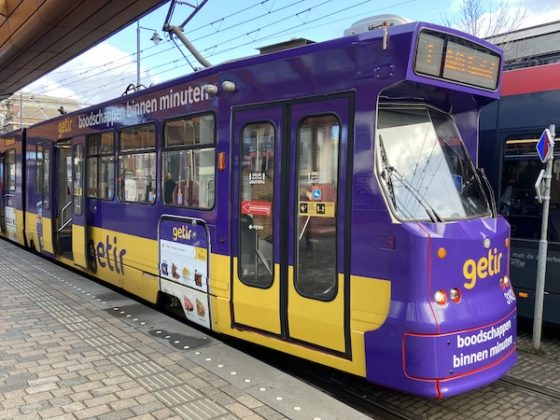 You’ve probably seen adverts for Getir and Gorillas, or maybe you’re already one of their customers. These are just two of the ‘ultra fast’ grocery delivery companies that recently invaded the Netherlands and have courted controversy in cities including Amsterdam. For better or worse, their battle could be coming to your neighbourhood…if it isn’t there already.

Keeping your eyes peeled is always a smart decision while walking around Leiden.

The city centre is full of narrow streets and blind curves, many of which were originally constructed centuries ago. Inattentive university students love to ride their bikes on the sidewalks and delivery drivers often wind up driving on them as well.

On a recent dark winter evening, I stepped across a narrow lane that’s been the site of plenty of screaming matches between cyclists, motorists, and/or pedestrians. That’s when he appeared: a 20-something delivery guy on a bicycle. He slammed on his brakes and screeched to a halt a fraction of second before causing a collision that would have probably sent both of us to the nearest hospital.

Impolite words were exchanged at loud volumes that ricocheted off the church across the street. A few seconds later, he continued on his journey with a bemused smirk on his face, once again at a speed that many might consider ludicrously unsafe. I couldn’t help but notice the GoPro camera attached to his bike helmet. Who was he and how soon would the footage of me yelling at him wind up on TikTok? As he disappeared into the night, I read the yellow word on the back of his purple jacket:

Who was that purple-clad man?

I didn’t know who or what a Getir was at the time, but a Google search quickly brought me up to speed. They’re an ‘ultra fast’ grocery delivery service that originated in Turkey. Customers can order groceries via an app and have them delivered in as little as eight minutes.

Over the past few years, they’ve been in the middle of an aggressive expansion across Europe. Getir is currently available in at least six cities here in the Netherlands along with others scattered around France, Spain, Portugal, Italy, and Germany. In some regions, they deliver meals from restaurants à la Deliveroo or Thuisbezorgd. The name means ‘bring’ in Turkish.

Their legions of purple-clad delivery personnel are currently competing for customers against a few similar start-up companies, perhaps most notably Gorillas. Like Getir, the Germany-based Gorillas also specialises in speedy grocery deliveries, but they’re available in more European cities and recently opened for business in New York City. In many areas, their crews attempt to complete their deliveries in as little as eight minutes.

Both companies’ incredibly fast delivery times have made them popular among their customers and many 20-somethings are more than willing to join their pay rolls.

Unlike Thuisbezorgd, which was criticised heavily for years for treating their employees like gig workers until they finally offered them contracts in December, Getir provides its staff with full and part-time positions with benefits including discounts on their products and paid holidays. An ad for open positions in Leiden states that delivery personnel get paid €12 an hour, not including potential tips from customers. 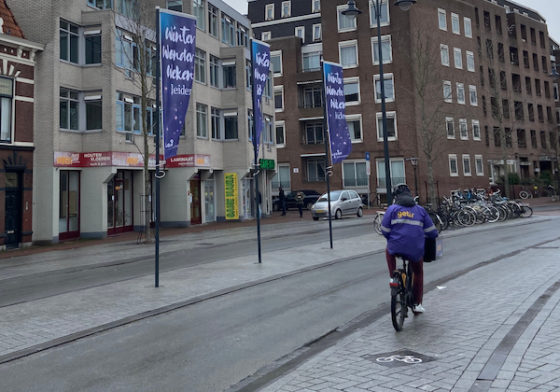 Nevertheless, competition for staff here in the Netherlands is still fierce. Ads boasting €200 sign-up bonuses for new hires are a common sight online in recent weeks. By comparison, a similar position at Gorillas offers pay starting at €13.30, phone allowances, and a retention bonus for employees willing to stick around for at least three months.

Life in the fast lane

Despite the perks, the high pressure to make deliveries in as little time as possible has taken a toll on many employees. Reports of long hours and unsafe working conditions have leaked out of Getir in recent months, but they’re nothing in comparison to the bad press Gorillas received throughout 2021.

Employees of Gorillas, which lures customers with the slogan ‘faster than you’, have reported on the physical and mental stress of trying to rush everything from fresh produce to several six-packs of beer to their customers through busy streets and at speeds that might make the average Tour de France participant wince. That’s not an easy task, especially if a customer lives on the sixth floor of an apartment building with a broken lift.

A Vice article about Gorillas from May 2021 outlined grievances ranging from the low quality of the company’s bikes, which can’t handle cobblestone streets, to the perils of trying to make on-time deliveries during rush hour. Last winter in Berlin, riders went on strike after being told they’d still have to make their deliveries despite the snow.

It probably goes without saying that living next door to one of these company’s distribution centres or ‘dark stores’, isn’t great, especially if you’re a light sleeper. One of the key components of their super fast delivery times is their close proximity to their customers. They often set up shop in or near residential districts in empty storefronts, storage units, or pretty much anywhere that provides enough floor space and short distances between them and their clientele.

These centres also operate at nearly all hours and seven days a week. A Getir distribution centre that opened in a storage space in the middle of Leiden quickly began irking nearby residents after their staff clogged up a sidewalk across the street with delivery bikes and scooters mere inches from two houses. More were parked around the corner in a narrow street.

The vehicles had been mostly removed at the time of this writing after several residents contacted city officials with their complaints, which also included tales of sleepless nights caused by the staff racing around almost constantly between the hours of 7.30am and midnight. 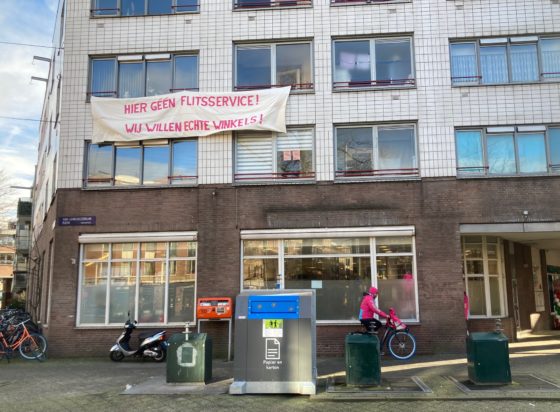 This Flink dark store was a shop. Photo: DutchNews.nl

In Amsterdam, the city council has now imposed a ban on any more dark stores opening up. Leiden is mooting similar moves and other cities, including The Hague are also questioning the appearance of so many blacked out windows in their high streets.

‘This pause has been introduced before the increase in dark stores gets out of hand,’ Amsterdam’s planning chief Marieke van Doorninck said.

Many of their layouts are similar to the ones you’d find in a night shop. In the case of Getir, when a customer uses an app to place an order, it’s quickly sent to ‘pickers’ at these centres who grab shopping baskets and dash around the aisles. After grabbing the items on the list, they quickly pack everything up and hand it over to a delivery person waiting at a counter by the entrance.

A big hit in Holland

If you don’t work for them, or live near one of their distribution centres, there’s a good chance that you’d love the services provided by Getir, Gorillas, or competitors like Flink and Zapp.

Their apps work well, they can bring groceries to your door in mere minutes, and the average price of delivery is only a few euros. The selection is more extensive than you might think, and they often offer substantial discounts on a wide array of products ranging from spices and laundry detergent to organic hazelnut milk and tubs of Ben and Jerry’s ice cream.

It’s unsurprising that they’ve proven popular in the Netherlands. According to recent research, their clientele tripled to an estimated 700,000 customers in the second half of 2021 alone. At least 13% of the country lives within the delivery zones of one or more of these companies.

Rotterdam resident Craig Stewart told DutchNews.nl he began using Gorillas to have groceries brought to his home after becoming increasingly frustrated with the limited delivery slots available from Albert Heijn.

‘We prefer them for now, mainly because of safety during the pandemic,’ he said. ‘The convenience can’t be beat, and some of their products are higher quality than Albert Heijn, which makes it easy to keep using them.’ 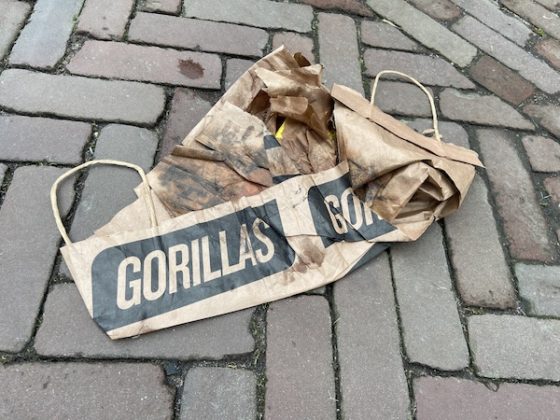 A disabled customer who opted not to be quoted said they’re great for those with limited mobility. Dario Boot, a student at the University of Amsterdam, also chimed in to say he often relies on deliveries from Gorillas. He lives in an apartment in a section of Amsterdam Noord without any night shops. There’s a Gorillas distribution centre across the street from his building, and they can often get stuff to him in as little as six minutes.

‘I have been mostly using them when I forgot something at the supermarket and it’s too late to go get it,’ he said. ‘Thus, I mostly order smaller deliveries of the things that I forgot plus some extra fruits or snacks to make it worth the delivery costs. I have, however, used them for bigger deliveries a few times during periods I was in quarantine awaiting test results.’

Too good to last?

If the potential for a massive lawsuit from an accident wasn’t enough to worry investors, the Telegraph dubbed the industry “a bike crash waiting to happen’ in an article last spring due to an increasingly crowded marketplace. There’s also the question of how much money there really is to be made once these companies burn through billions in venture capital while juggling high-overhead and deliveries that, on average, earn them a few euros.

Regardless, Getir alone is currently valued at $7.7 billion and is aiming to attract at least another billion in investments to further their ambitious expansion goals over the next few months.

Only time will tell if all of this is a mere fad or if these ultra fast grocery delivery companies will be clogging up the nation’s bike lanes for many years to come – if local authorities allow them to set up their distribution centres, that is.