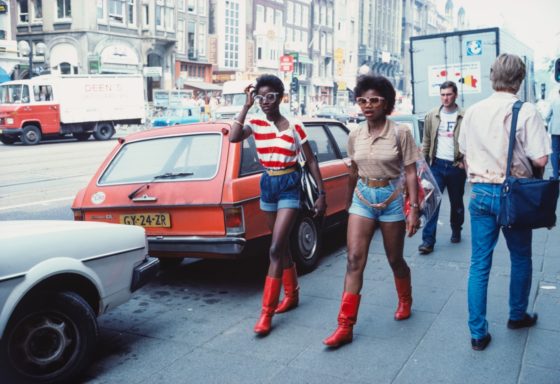 Queen Máxima’s silk wedding gown and the sensational ‘vagina pants’ worn by pop artist Janelle Monáe are among the 150 extraordinary creations at Maison Amsterdam – The town, the fashion, the freedom, a celebration of Amsterdam’s contribution to the fashion world, which opened on Friday 17 September at Amsterdam’s Nieuwe Kerk.

A veritable who’s who of the Amsterdam fashion world past and present, Maison Amsterdam has dusted off wonderfully nostalgic outfits by Max Heymans and Fong Leng and shone a light on shiny newcomers such as digital fashion house The Fabricant and Darwin Winklaar, the winner of prestigious fashion award Lichting 2020.

Staging a fashion exhibition featuring over 70 designers and spanning 250 years of history was challenging enough for this collaboration between the Nieuwe Kerk and the Amsterdam Museum, but the 15th century church’s spectacular architecture was far from the white box curators are used to working with.

‘The church is fabulous, but it’s quite large,’ Ninke Bloemberg, fashion curator for the Amsterdam Museum told DutchNews.nl. ‘We used a lot of transparency … so you can see the church but still have the designs displayed in a respectful way.’

The venue yielded ‘very pleasant surprises’ too, says Bloemberg, such as the colour-play achieved by positioning the resplendent Amsterdam rainbow dress (2016) in front of a stained glass window. It is hoped that the flags of the non-LGBTQi+-friendly countries stitched into the 16m-diameter skirt of this living art piece transform over time as countries decriminalise same-sex relationships and a rainbow flag replaces their national colours on the dress. 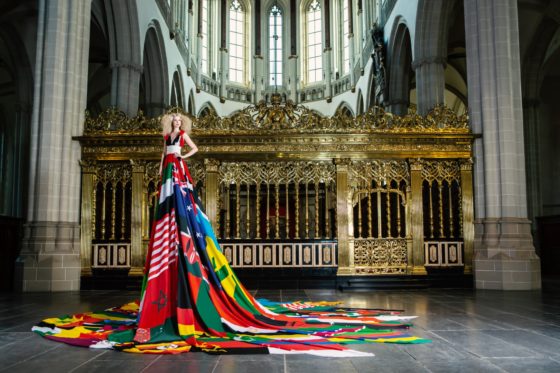 The rainbow dress may be a showstopper, but it is the prospect of seeing Queen Máxima’s wedding gown which will doubtless draw in the crowds − a marvel of embroidered lace and Mikado silk, and more ivory in colour with the passing of time.

The exhibition weaves a route through Amsterdam’s fashion districts, the up-and-coming brands of the trendy Zeedijk, for example, and the grandiose architecture of the Leidseplein department store Hirsch & Cie, now the Apple Store, which brought high quality fashion to the capital in 1882 and inspired the backdrop to a catwalk of 19 models at the exhibition’s heart.

On this runway, mannequins displaying iconic Dutch labels such as Puck & Hans, whose flamboyant Rokin store was a honeypot for fashionistas of the 70s and 80s, pose alongside contemporary pieces such as Duran Lantink’s provocative ‘vagina pants’, ballooning trousers of pink tulle, cotton and silk, made famous in Janelle Monáe’s 2018 pop video for the single PYNK. 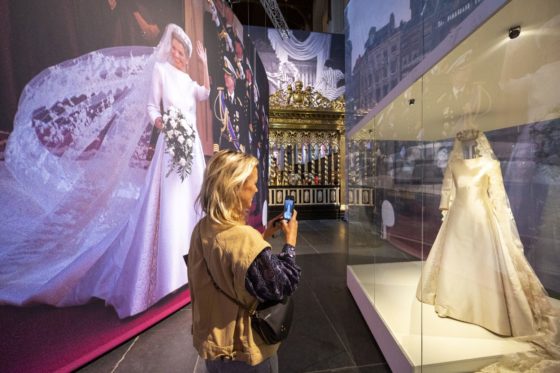 Queen Máxima’s wedding dress will be the highlight for many visitors. Credit: Evert Elzinga

The exhibits also speak to a changing Amsterdam. A tightly-corseted 18th century gown with hips widened impossibly by huge interior panniers, contrasts with the expansive trousers which passed for a skirt, worn by women a century later so they could enjoy the freedom of the newly invented bicycle.

Other exhibits document the current pandemic, such as a three-metre wide hooped denim tutu which enforces a 1.5m social distance, designed by G-Star for the National Ballet. Elsewhere, garments by Ronald van der Kamp made from recycled factory cut-offs and excess stock, hint at the impact of closed boutiques and cancelled fashion shows. 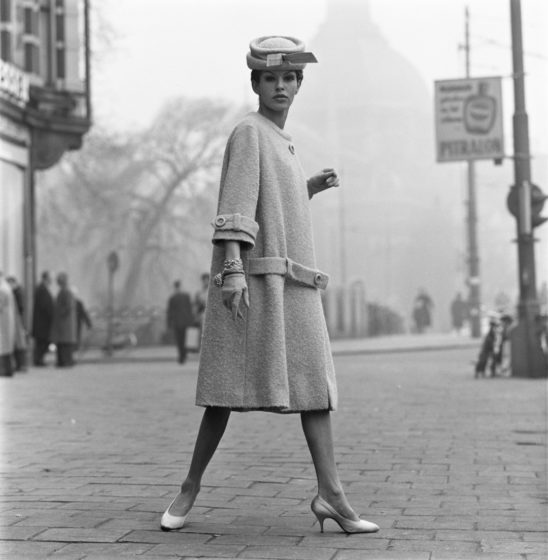 Welcoming visitors to Maison Amsterdam is mayor Femke Halsema, one of six celebrities providing video accounts of clothing or accessories special to them. In line with the exhibition’s theme of freedom, she has selected a rainbow necklace she wore to the celebration of 20 years of same sex marriage earlier this year.

In another video, fashion journalist and programme maker Aynouk Tan, buried in a multi-coloured froth of fabric, also evokes the openness of the capital, and stresses the importance of fashion in expressing the wide spectrum of gender identity. Maison Amsterdam appears to respond to the call with Aziz Bekkaoui’s sleeveless, drapey version of a man’s suit (2001), a boy’s dress from 1890, and an outfit belonging to dragqueen Dolly Bellefleur.

In line with the exhibition’s inclusive approach, the participation of the public is encouraged via a photo competition in association with Mirror Mirror Magazine soliciting outdoor snaps of fashion lovers in iconic Amsterdam settings. The winning photograph will feature on street posters and in the exhibition itself. 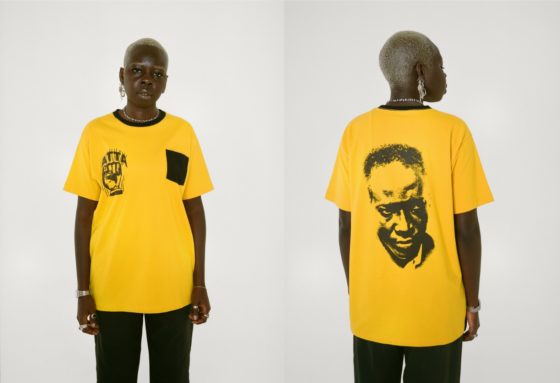 Batik from Indonesia and the vivid prints of traditional Surinamese dashikis (men’s shirts) and kotos (voluminous dresses) are also given space, highlighting the multicultural community that make up the capital and the freedom to express heritage through dress. But walk a little further and a blouse with a forcibly added Jewish star of David, and a patchwork dress sewn in a Japanese prisoner of war camp are a sobering reminder of choices once made on behalf of the Dutch people.

More positive, is an evening gown created especially for the exhibition by rising designer Karim Adduchi. Combining middle-eastern tapestry, a Jewish bekische coat and a Catholic chasable, it represents his own plural religious background as well as the successful coming together of different faiths in a city widely known for its tolerance.

For Bloemberg, it is this ‘experimentation, innovation and community’ that underpin the fashion industry’s success in Amsterdam, a place, she says, where ‘everybody knows each other’. And as the exhibition’s enlarged photographs evidence, this quality translates to the streets. ‘Amsterdam has the feeling that you can be who you would like to be and dress the way you would like to dress,’ says Bloemberg.

The exhibition is at Amsterdam’s Nieuwe Kerk from 18 September 2021 until 3 April 2022. An audio tour in English is available.

To coincide with the exhibition is Catwalk Club, a series of theatrical performances and readings (in Dutch) in four different night clubs. Each venue spotlights a different fashion designer and the era they represent, with spectators dressing up accordingly. From 7 October to 24 January.