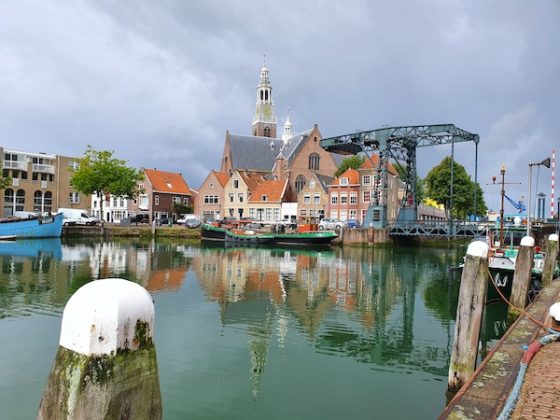 Steve White and his wife spent 10 enriching days in up-and-coming Georgia in 2019 and liked it so much that in 2020 they planned a couple of weeks in neighbouring Armenia. But then The Darkness fell upon the world, and they ended up sleeping in a larder in a 17th century lock keepers cottage in the ex-fishing port of Maassluis, a distant suburb of Rotterdam.

We hit upon Maassluis as an unlikely substitute for Yerevan after my Dutch wife read a book by well known Dutch writer and one time Maassluis resident, Maarten ‘t Hart, and said it sounded cute.

With plans still unformed, we were idly self-isolating with a laptop on the sofa one day when we happened upon the Hendrick de Keyser website – an outfit which rents idiosyncratic accommodation in Dutch listed buildings.

In Maassluis they offered up Het Gemeenlandshuis which ‘is a beautiful example of the Renaissance architectural style of the first half of the 17th century. It was built in 1626 by order of the dike count and water boards of Delfland. The building was built on the port of Maassluis, in the vicinity of the Delfland drainage sluices.’

‘Humm. Not sure if spending some time next to the Delfland drainage sluices near Rotterdam is as enticing as exploring the Shikahogh State reserve in Armenia,’ we said to each other.

When I saw pictures of the outrageously splashy looking Gemeenlandshuis, right on the dockside, I was sold on its location, its ostentatious appearance and the immaculately restored lock keeper’s cottage spread across the whole ground floor, including a wacky bedstede – a double broomcupboard/coffin sleeping arrangement. 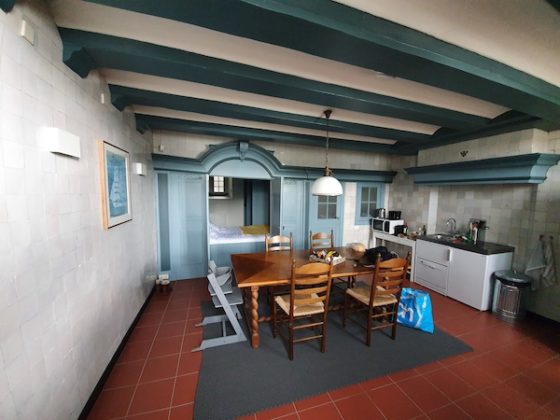 ‘I don’t care how much it costs. I want to stay in this place.’ I said to my wife with atypical cavalier conviction. ‘For my holiday this year I am happy to sleep for two nights in a kitchen cupboard next to the Delfland drainage sluices in a Rotterdam suburb.’

Maassluis is an hour’s drive from where we live near Amsterdam, the last part of which takes you through the endless greenhouse gulches and crystal crop houses of Westland – a glassed-in area the size of Belgium from which the Netherlands (the second largest agricultural exporter in the world) despatches courgettes to the starving masses.

Technically Maassluis is a ‘city of over 30,000 people’ but you can amble around all the bits worth seeing, in the vicinity of the dock, in 20 minutes flat. We didn’t venture much beyond the end of the two main canals – the Noordvliet and Zuidvliet – where the olde worlde sex appeal of a bygone Netherlands suddenly ends in a brutish concrete suburb, with the A20 motorway flying overhead shovelling truckloads of tulips and cheese toward the ferries of the Hook of Holland about 10 kms away.

Sticking with Maassluis’s meaty heart around the Noordvliet and Zuidvliet, and the immediate surrounding area, you could well imagine yourself clogging around in a previous life, gossiping with friends, smoking shag from a curved clay pipe and sliding raw herring (with raw onion) down your gullet while Vermeer or Rembrandt conduct a spot of plein air sketching nearby. There isn’t much to do in Maassluis but it’s a splendid place to do it in. 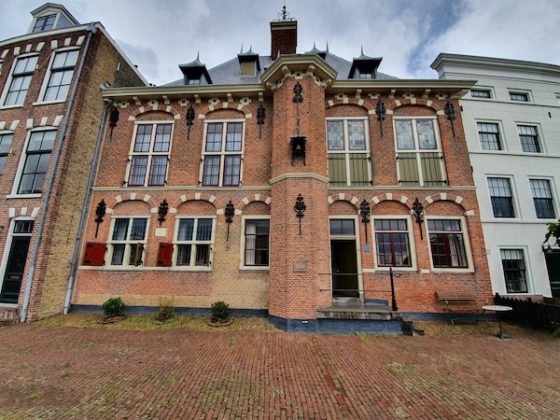 The outside of the Gemeenlandshuis. Photo: Steve White

Since The Darkness descended on the world my life has not been a thrillfest and the novelty of getting straight out of a four-sider cupboard/bed (‘Bet they don’t have these in Armenia’) into the kitchen was a titilation that verged on the ecstatic.

The Hendrick de Keyser people pride themselves on their sympathetic updating of their protected monuments and the Gemeenlandshuis is no exception. To get from one side of the eminently comfortable cup/bed to the other, without clambering over your sleeping partner, entails a stroll through the kitchen (equipped with microwave, hot plates, coffee machine, toaster, and enough kitchen equipment to sink a sand barge) into the hall (separate loo) through the large lounge (TV, Wifi, sofas, wood burner) into the bathroom (modern shower, sink, loo,) and back into the environs of the other side of the bedstede.

While the lockkeeper’s cottage took up the whole of the ground floor of the Gemeendlandshuis, the upper floors, which were once a meeting place for the Delfland Water Board, are now a museum and are an essential destination for devotees of Dutch stained glass, or the finest wooden spiral staircase in the whole of the Netherlands.

In the front of the Gemeenlandshuis is a pedestrian-only dock which catches the evening sun and draws out the inhabitants of all the other the dock houses to drink beer and eat cheese.

Next to the dock is a working lock and bridge and periodically the bridge bell rings to signify the arrival of great big hulking sand barge, as fat and long as a stretch hippo. There is a tricky sharp turn to make in front of the dock and any miscalculation by the bargee would undoubtedly traumatise the foundations of the Gemeenlandshuis, and shake you from your cupbed, onto the floor of the kitchen.

‘I think it’s only worth coming here, if you stay in this house. Thuismuis.’

‘Ẃhat are we going to do today?’

A fifteen minute walk from the Gemeenlandshuis takes you to the Nieuw Waterweg the main river outlet from the city of Rotterdam and a veritable A10 for barges, tankers and container ships. Turn right at the Nieuw Waterweg and after 4 kms, half way to the Hoek van Holland, you encounter an engineering marvel which only the Dutch, with their mastery of low level water management, could have built. 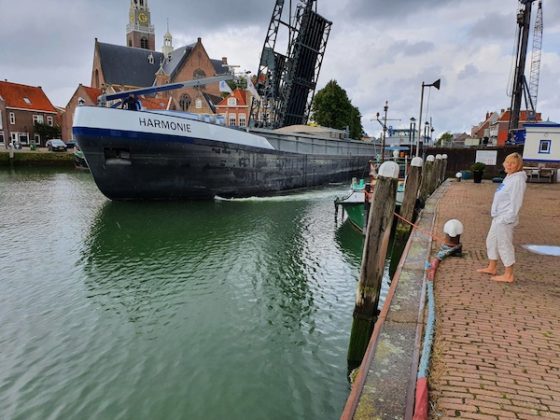 The Maeslantkering comprises two, 210 metre movable barriers on either side of the 360 metre wide Nieuw Waterweg. These barriers close automatically and sink to the river bed in the event a predicted storm surge down the North Sea threatens to submerge Rotterdam. Finished in 1997 its a stupendous piece of engineering which, in 23 years, has only closed once in anger, in 2007. When it comes to flooding the Dutch take no chances.

Across the Nieuw Waterweg is Rotterdam Europort an ostensibly bleak slab of land reclaimed from the North Sea and now put to good use as a milking station for some of the worlds largest oil tankers; as a swap meet for brightly coloured containers; and as a place where you can stock up on iron ore from the largest bulk cargo ships alive (the EECV quay has a draft of 24m, one of the deepest in the world).

You can drive around Europort – an experience which doesn’t feature in Lonely Planet’s ‘Epic Drives of the World’ but it does have a grim fascination. And from Europort, for contrast, you can then chunter on down the N57 to the pleasant coastal resorts and fine wide beaches of Zeeland, the Dutch Duneland Riviera.

And if its city excitement that you crave, then, of course, Rotterdam itself is edgy, shippy, arty. Demolished in WWII, Rotterdam is now ahead of the curve architecturally speaking (see the Cube Houses) and it is a far more interesting city than you expect it to be. As long as you are not expecting it to be Amsterdam.

Gemeendlandhuis museum is usually open every third Sunday of the month between 12am and 4pm but is currently closed in connection with coronavirus.

There is a regular car ferry from Maassluis to Rozenburg (about 5 mins) for Europort and Zeeland. www.ottevangerov.nl