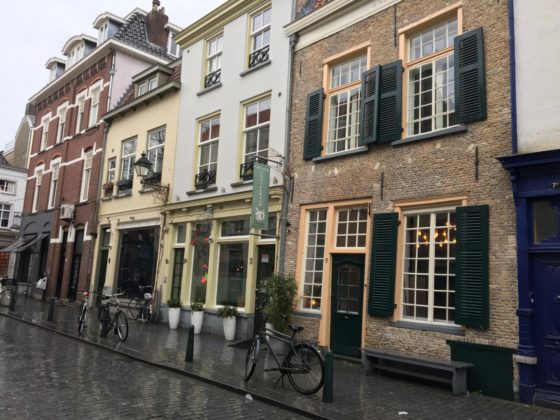 My first experience of Breda was in February and it was cold, wet and grey. Yet the North Brabant city known as the pearl of the South had not lost its lustre.

Voted Best City Centre from 2017-2020, Breda is more preened than most – a hangover perhaps from centuries of royal occupancy: the Nassaus, who resided at the castle. But despite its twee shops and chic terraces (do plastic chairs even exist in this town?), the atmosphere is above all convivial and continental – even as the rain lashes down.

Passed between the Romans, the Spanish, French revolutionaries and German occupiers – and almost totally destroyed by fire in the 1500s – it is little wonder that its residents take such good care of Breda. Elegant listed buildings painted in pale, fresh colours sit alongside medieval relics. All are circled by a moat of canals, ‘the Singels of Breda’, popular with boat lovers on drier days.

A trip to the Stedelijk Museum is a great way to see what Breda looked like in years gone by. A 16th century cityscape in oils (anonymous) holds clues, as does a market scene by 19th century artist Petrus van Schendel, an expert in light and dark. 15th century statues decapitated by Protestant Reformists recall dark times in the predominantly Catholic South, while paintings by Dio Rovers (1896-1990) and sculptures by Sef Peeters (1947-2019) (until 23 August 2020) spotlight modern Breda artists.

Breda’s art scene is not limited to galleries, however, and if street art is more your thing, try Blind Walls, a self-guided tour of the city’s best graffiti spots.

Open-air art can also be found in the Willem Merxtuin, a charming garden hidden behind arched doors in the walls of the Sint Catharinastraat and pretty Sint Annastraat, and famous for its many sculptures. While you’re there, a mere €2 buys you entrance to the museum and pretty herb gardens of the Begijnhof Breda (nunnery), also on the Sint Catharinastraat. Founded in the 13th century, the former monastery is still home to single female residents today. 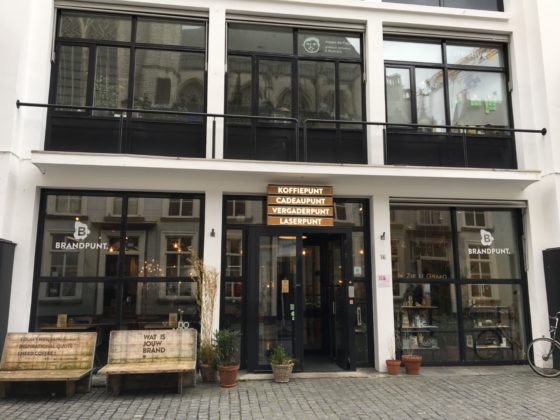 At Brandpunt, you can get coffee or browse the quirky ethical products. Credit: D.Nicholls-Lee

Shoppers are spoilt in Breda. The Ginnekenstraat is the main shopping street, but it’s much like any other high street, so I’d recommend the Veemarktstraat as a better starting point. Here you’ll find a mixture of upmarket chains, such as homeware store Dille & Kamille, where I whiled away a happy half hour when the rain was at its worst, and independent boutiques such as edgy skate store Bonk, identifiable from the giant skateboard out front and, to the rear, a tree strung with trainers.

For boho fashion and vintage clothing for women, check out Fem, Olive Oyl’s Rusty Zipper and Happy Hippies on the Halstraat. For street markets, the city’s central square, the Grote Markt, comes alive with stalls on Tuesday, Wednesday (flea market) and Friday.

While you’re there, peek into the 15th century Grote Kerk, where nine Nassaus and the first Prince of Orange, are buried in the Princes’ Chapel, and then head down the Reigerstraat and pop into hat specialist Matelot or cross over to Brandpunt for coffee, gifts and homewares. Here, every product has a story and social purpose, from chopping boards made from Breda wood to 3D-printed jewellery. If you’re peckish, Foodhall Breda – with 12 different food outlets – is also on this street. 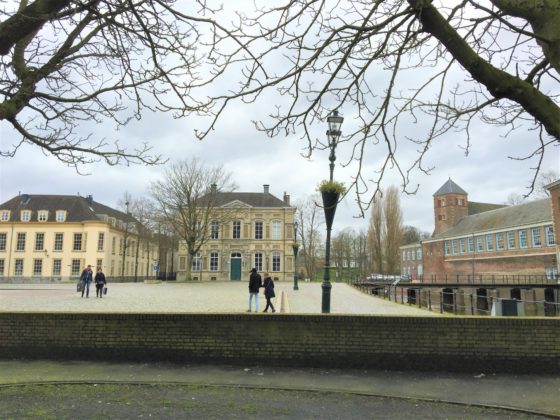 Once home to the Nassau family, the castle on Kasteelplein is now a military barracks. Credit: D.Nicholls-Lee

Get the kids tired

Optisport Sonsbeeck has an outdoor pool for warm days, while indoors, older kids can whizz down a water slide while wearing a VR set. The Sonsbeeck park, with its varied birdlife, is on its doorstep and may also appeal to restless nippers.

To the north of the city, the urban beach at Belcrum is popular with families by day and party people by night. Older kids might prefer the indoor skatepark Pier15 just next door.

When you’ve worn them out, take them to Familie Snorhaar, a café populated by nine friendly felines, where you can relax with cake and coffee while they fuss over the cats. My daughter did not want to leave. 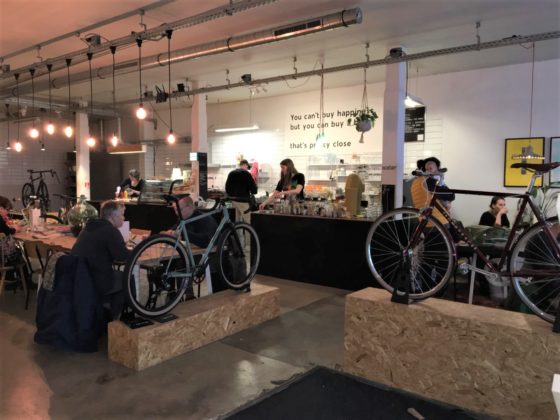 Kamu, a bike shop and cafe in one. Credit: D.Nicholls-Lee

If you are short on time and cash, pop into a bakery and grab a worstenbroodje (sausage roll) – a Brabant speciality. Ambachtsbakker Van der Kleij, on the southern edge of the city, made the top ten in the Lekkerste Brabantse Worstenbroodje contest  last year, but you will see this popular snack sold in bakeries throughout the centre.

Promising ‘wheely good coffee’, Kamu, a bike shop-cum-café, serves simple fare to a crowd of all ages including workers at laptops, families and couples, seated amongst retro furniture, trailing pot plants and bike parts. Lunch is open sourdough sandwiches (around €8), toastis (€6) and soup (€5), with kiddie options from €2-€4.

For something more substantial, you can fill up on three courses for just €10 at Den Boeren Stamppot, which serves no-frills traditional Dutch mains such as stews and sausages, alongside potatoes and vegetables.

For a more refined experience, try Dames Pellens, which has one of Breda’s prettiest terraces, with candle-lit tables grouped around a tree. The broadly Dutch-Mediterranean cuisine is immaculately presented. At lunchtime, a three-course menu du jour costs €19.30. Fine diners can high-end it in the evening with 4-7 courses (€45-€69).

Another – more laid-back – al fresco option is hip In Kannen en Kruiken, which has a cute garden terrace to the rear, and serves lunches such as pearl couscous salad (€13) and veggie flatbread (€12.50), while evening options include burgers (from €18.50) and borrel snacks (from €3.75).

If after a long day’s touring, you are in need of a sugar hit, the bathtub full of hundreds and thousands in the window of A Cup of Cake and the candy-striped wallpaper within, send a strong signal that you’ve come to the right place. The menu includes multi-coloured freakshakes begging to be instagrammed, but their speciality is – obviously – cupcakes. A cupcake slot machine which includes a mystery box, invites customers to play pot luck. 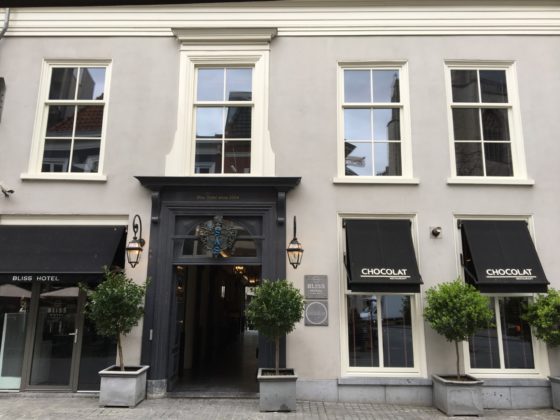 A single room starts at around €40 a night at Het Klooster Breda, a former monastery with lawned grounds and its own bakery. Double rooms with private bathrooms cost around twice as much, but are still a snip since breakfast and lunch are included.

Just east of the central canal ring is Het Scheepshuys, a boutique hotel with tastefully decorated singles from €68 per night and doubles from €78. Breakfast is €12. The smart villa gets its name from the large copper weather vane in the shape of a ship, perched proudly on the roof. The interior is smart but homely, with marble floors and chunky wooden stairs. A large conservatory where meals are served overlooks the garden.

Bliss Hotel is located slap in the heart of the city and has nine chic rooms, all of them suites and each with its own theme. ‘Long Island’ is all about the whitewashed wood cladding and log fire, while the navy blue ‘Classic Suite’ claims to be ‛designed for Bond figures’ and features cherry wood furniture and a four-poster bed. Rooms start at €155. Look for the special offers combined with Restaurant Chocolat which occupies the ground floor.

If you are travelling by car, there are car parks dotted all around the city centre, including several multi-storeys. Wheelchair users might like to know that Breda won the 2019 Access City Award.

I enjoyed the short walk into town from train station Breda Centraal, which takes you in a straight line down Willemstraat, a tree-lined boulevard, and then through the attractive Valkenberg park, where I was surprised to see free-ranging chickens, quite at home amongst the monuments, fountains and flowers.