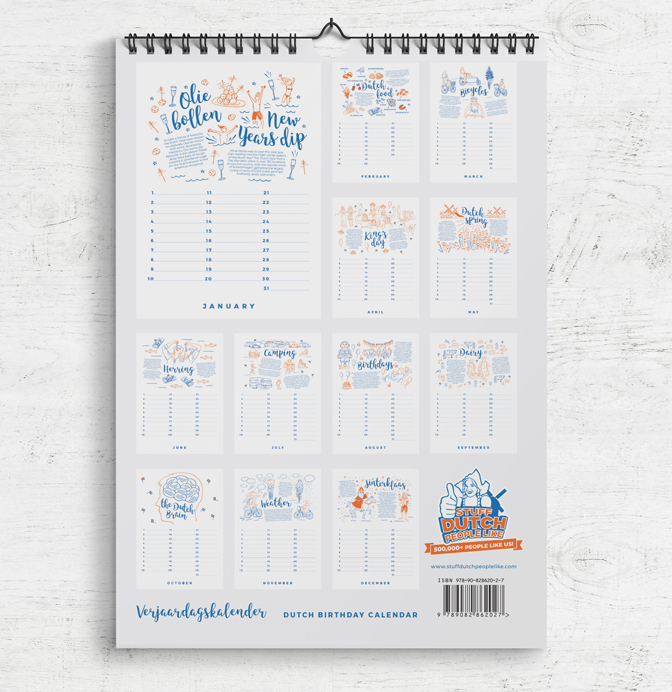 While you’re knocking your knees against the wall or developing frostbite while washing your hands, you might have noticed a curious feature in the Dutch loo: a calendar. And not just any calendar, but a yearly birthday calendar.

‘Other than corona measures, what two things did the King’s speech and [prime minister Mark] Rutte’s speech have in common?’ asks Dr Irene Stengs, a senior researcher at the Meertens Institute, which studies Dutch culture and tradition.

Answer: ‘That the people are suffering because they are missing birthday parties.’

Rutte has mentioned the disappointment of missing birthday parties in multiple press conferences during the corona pandemic. The Dutch have taken to drive-byverjaardagen (drive-by birthdays, where people drive past the houses of their friends and family to wave since parties are not allowed.) Even the biggest national holiday in the country – Koningsdag – celebrates the birth of the aforementioned monarch.

‘Calendars are an articulation of this tradition,’ says Stengs.

Methods of timekeeping have existed since prehistoric times, but the calendar as we know it was introduced in 1582. Named after Pope Gregory XIII, it is known as the Gregorian calendar. The concept of a birthday, of course, couldn’t exist until calendars were invented. The earliest noted birthday comes from the Bible, referring to the birthday of an Egyptian Pharaoh, but it was the hedonistic Romans who started celebrating the birthdays of non-famous people.

Calendars to track the birthdays of your friends and family date back to at least the 19th century. While they existed in the Netherlands before World War II, it was the secularising of Dutch culture that researchers suspect led to their popularity in Holland.

In the years after World War II, family size decreased, while the standard of living increased. So parents now had the resources to spend on celebrations.

‘Primary school teachers, who were mostly educated in the west of the country but who were assigned to schools nationwide, started celebrating their birthdays,’ says Stengs. This evolved into celebrating the pupils’ birthdays as well.

Religion also played a role. Many European Catholic traditions honour a name day, where you celebrate the day of the saint for which you were named. But the Netherlands had a larger Protestant population, so celebrating the actual day of birth took hold.

As the popularity of birthday celebrations grew, so grew the need for a way of keeping track of them. And, as families became smaller, people began placing more importance on relationships beyond the family. Now you not only need to keep track of the birthdays of parents and children, but their classmates and neighbours as well.

‘You must drop by on someone’s birthday in the Netherlands,’ says Stengs. To participate in the dreaded circle party, of course.

Not everyone enjoys the Dutch birthday culture. Henry Schogt, author of The Curtain: Witness and Memory in Wartime Holland, writes in his memoir about moving to Canada: ‘It is a relief no longer to live under the constant pressure of the birthday calendar.’ 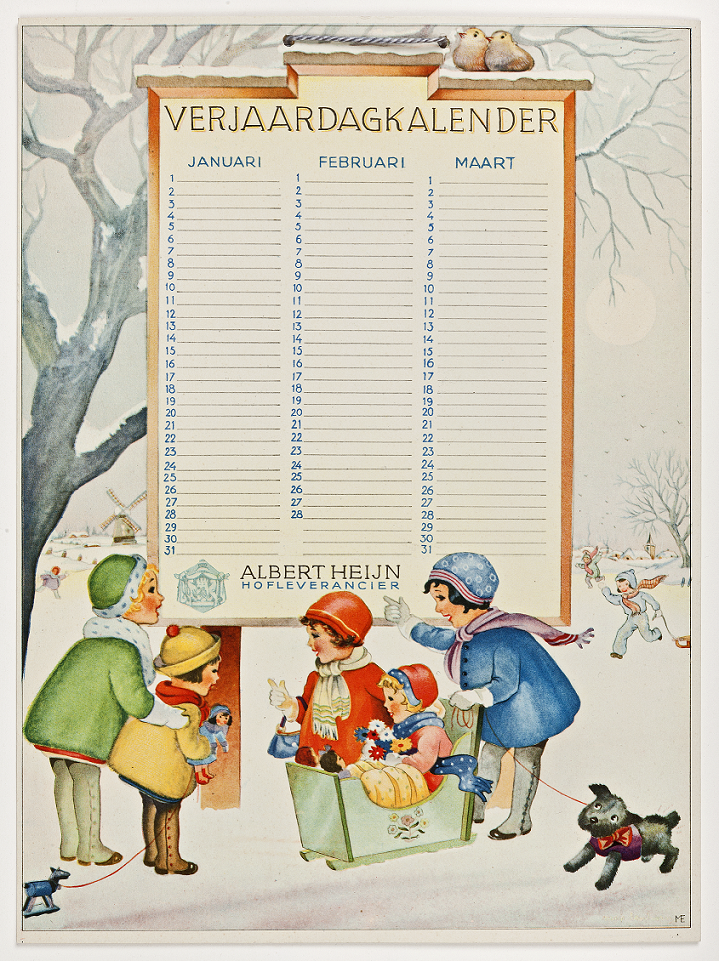 The mass production of birthday calendars probably started as a marketing tool. Insurance companies and grocery stores printed birthday calendars to send out as promotional materials. ‘It was quite a commonplace in the 20th century,’ says Inge Schriemer, a curator at the Openluchtmuseum near Arnhem.

These days, you can find a calendar for every taste, from scenes of nature to children’s cartoons.

And, of course, in true Dutch style, the bathroom calendar is both thrifty and efficient. No need to buy or update a new calendar every year. You just reuse the one you have, adding the names of new babies or new friends. And it appeals to the Dutch desire for everything to be neatly slotted into the diary.

But how Dutch are they really? A few years ago, the popular social media site Reddit had a discussion about whether or not users had such a calendar in their bathrooms.

The positive responses came overwhelmingly from the Netherlands and Belgium, with a few users from Germany and Switzerland also confirming they were familiar with the tradition. But beyond these countries, the concept was mostly unheard of.

The dos and don’ts

Should you be visiting a toilet as a guest, you should know that you never, ever write your own name on the calendar. This is a sacrilege.

‘Can’t seem to find your B-day entry? Well, the official relationship-ranking is in and turns out you’re just not as close as you thought you were!’ says Stuff Dutch People Like.

There is debate over whether or not a deceased person should be crossed off after they have departed this world. An older Dutch person, who did not want to be named for this story, was opposed to the practice: ‘It’s depressing to go to the toilet and be reminded that all of your friends are dead.’