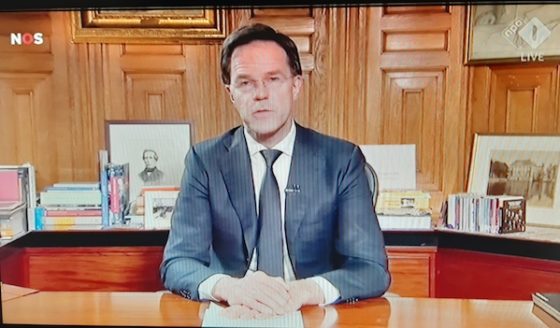 Some seven million people out of a population of 17 million watched prime minister Mark Rutte on television on Monday night, in the first prime ministerial address to the nation since the 1974 oil crisis. It was followed by plaudits all around for the prime minister and some dissenting voices.

Rutte had to deliver some harsh truths and did so without mincing his words, Jonker said. Never straying too much from the daily reality of the consequences of this crisis Rutte ‘avoided Churchillian rhetoric but the blood sweat and tears were nevertheless tangible in his speech’.

Rutte’s leadership has already earned him the title of ‘best prime minister since WW II’ and his handling of this crisis will put him firmly in the ranks of such political icons as Willem Drees, Ruud Lubbers and liberal statesman Johan Thorbecke, Jonker FD said.

The AD’s Özcan Akyol also praises the prime minister’s honesty. ‘Politicians tend to play down things, telling us it everything will be fine. Rutte was realistic: this virus is with us and will be for a long time.’

By saying this the prime minister took a risk, inviting criticism from the opposition for acting too late, Akyol said. ‘But Rutte takes his advice from science, not opinions. (..) A good leader inspires confidence. Rutte did exactly that.’

However, Rutte’s dependence on ‘experts’, who told him not to close down the schools until the federation of medical specialist – ‘experts as well’ – said it was necessary,  makes him vulnerable, Wynia said. Rutte did not explain why one group of experts knows better than another, nor did he explain why other countries, who also cite experts, decided for a different scenario.

His view was echoed by Forum voor Democratie-fractieleider Thierry Baudet who said he thought ‘hoping for herd immunity is a risky strategy. France is going into lockdown on the advice of experts, why not the Netherlands?’, he said in a reaction to the speech.

PVV leader Geert Wilders criticised the prime minister for previous health service cutbacks and saidhe  had ‘a duty to ensure as few people as possible fall ill. ‘A lockdown would help achieve this,’ he said.

All the other party leaders were united in their praise for the prime minister. ‘An honest and impressive message,’ GroenLinks leader Jesse Klaver said.  Denk MP Farid Azarkan said the prime minister had been ‘clear about the scenario to be followed’ and complimented the health services for their work.

All parties said the message of unity and solidarity was one of the most important elements in the speech.