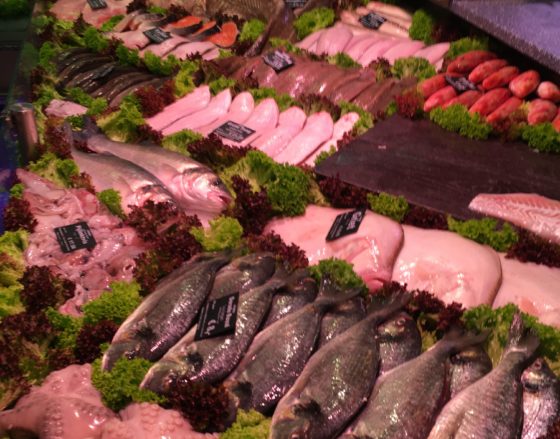 What do you do if you have been sent to live in the Netherlands as a trailing husband, while your wife works in a high powered job? Columnist Joe Weeg, who was here in 2018, is back again for a short visit. Part 3: Fish

The tall, strong-looking Dutch woman began her story by telling me about fish. The story suddenly took a right turn into speed dating. And then the darn thing ended up about Dutch character. Her character.

People are never a straight line.

I’m from landlocked Iowa, and in my youth, fish consisted of one thing — fish sticks. A highly processed, deep-fat fried delicacy that was a staple of meat-free Friday’s for my large Catholic family of birth. And, frankly, fish sticks are a treat to this day. Drowned in tartar sauce, they are a salty, greasy delight that taste mostly like the same tartar sauce they were dipped in, but crunchy.

I must admit as I grew older my understanding of what constituted fish was challenged. My wife is an adventurous eater and began ordering fish that actually looked like fish. And grocery stores all over Iowa are selling fresh fish, while restaurants are offering fish entrees, and my own children are betraying me by eating, of all things, sushi.

Where did I go wrong?

‘Dad, you have to try this. It’s called a Dynamite Roll,’ my son Emmett says.

‘Raw fish?’ I watch the chef preparing the fish in front of us until finally I choke a little, turn pale, and run for the door. My son just shakes his head.

So here I am visiting The Netherlands. Fish paradise.

Which is why I’m talking to a tall, Dutch woman knowledgeable about all things fishy.

‘I have worked for 15 years with fish.’ Marie-Claire David gives me her easy smile.

‘In English, I would be called a fishmonger.’

So, she is the perfect person to ask penetrating fish questions like . . .

Are you sick of fish after being around it all day long?

‘Not at all, I eat it even at night after work, I love it. I am really fish girly.’ Marie-Claire laughs at the silliness of my question.

Okay, here’s a subtle one.

Doesn’t this fish gross you out?

Seriously? You got to be kidding. What about that slippery thing in front of you?

‘This fish I am cleaning right now is called sliptong in Dutch. You would call it baby sole. It is only found in the North Sea. It is very local, it is very fresh, it is very Dutch. You have to eat flat fish in the summer because the meat of the fish is thick. In the winter they use all their energy producing eggs. You eat flat fish when you can open your windows.’

Oh, she knows her stuff. I’d better be careful.

What about this Dutch herring that everyone talks about?

‘Herring is caught these days further north because the North Sea is getting warmer because of climate change. It is fished and put in buckets, where it is salted and processed in a progression of freezers. It comes to us and we do a defrosting process. I’m then going to clean it so that there are no bones.’

Yikes, and how does one eat this salted thing?

The traditional way of eating the herring in Scheveningen is leaving on the tail without any onions. But in Amsterdam it is very traditional to remove the tail, cut it up in pieces, with onion and pickle.

‘Kibbling in the past was made from the cheeks of the cod. And they cut out the forehead meat also. And this was deep fried. These days it has been changed because cod became very expensive. So we use this fish that is plenty of in the sea and it is very firm fish called pollack. We mix it with butter, water, and flour, and put it into a deep fryer. Very slowly so that each one is beautiful in itself and nice and crispy. We then herb it. And serve with sauce on the side.’

At last, something familiar. And delicious!  But I had to ask one more question.

So, I’m curious, how is it being a fish monger as a woman?

‘It is an unusual profession. One year ago when I was going on a speed date, I was thinking, ‘Am I going to be honest about working in a fish shop during the three-minute conversation with men?’ Or am I going to lie a little bit and say, ‘Hey, I’m in real estate’?’

‘So I told those men I’m in real estate. I did not tell them I’m a fish girl.’

‘After that experience I thought this is wrong. Am I ashamed of what I do?’

‘I embraced this part of my life. I’m cool. Now I tell everyone that I work with fish. ‘Do you have a problem with that?’ I say.’

Marie-Claire, with sparkling eyes, shoulders back, and chin firmly set, goes back to work.

There you have it . . . fish, speed dating, and Dutch character. Never a straight line.

And I don’t have a problem with that.

This article was first published on joesneighbourhood.com