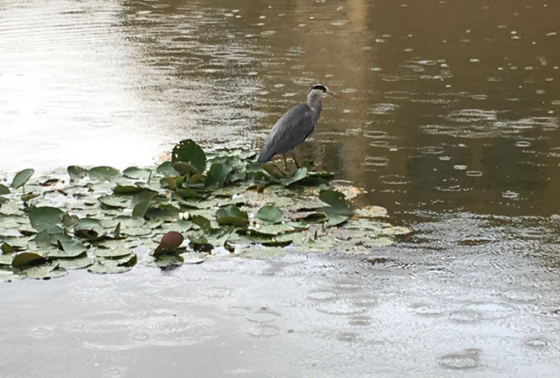 What do you do if you are the Netherlands as a trailing husband while your wife works in a high powered job? Visiting columnist Joe Weeg, who spent time here in 2018, is back in The Hague again. Part 1: Rain

Rain in the Netherlands has a certain texture that doesn’t exist back home in Iowa. Here in the Netherlands the rain rarely rages with such thunder and lightning that you decide maybe it would be a good idea to crawl under the table with the dog. Sure, it rains nearly every day . . . but quietly.

I think the rain reflects the Dutch sensibility of ganug — freely translated by me, a person who doesn’t know a lick of Dutch, as, ‘that’s enough of that nonsense.’ Moderation counts. It’s akin to the Dutch idea that healthy eating is important, but please pass me the fries.

Henriette Priester, the Dutch mother to all her visitors at the gym she operates with her husband in The Hague, says that her mom had a typical Dutch saying when she complained as a child about the rain.

That made such sense to Henriette that she told the same to her children. With a straight face no less.

So, I take this to mean that everyone is just expected to get on their bike and get on with it because . . . what? It could be worse?

Easy peasy to ride in the rain, according to the Dutch. Or, more accurately translated: ‘Riding in the rain is like two fingers in your nose.’ Yup, that is a true Dutch saying that doesn’t work for me either. But then again, I’m not Dutch.

Margreet, a stylish Dutch woman, seems the perfect person to ask about the ruinous affects of biking in the rain on her makeup and clothes.

‘I don’t care,’ she says with disdain at the idea. ‘I will dry up. And if I have droopy eyes because of my mascara, I just wipe it away.’

‘It rains all the time. We Dutch are so used to it. It doesn’t bother us at all.’ And off pedals Margreet as the rain drains off her hat as slick as on a sloped roof of an Iowa barn.

And in the Netherlands, the rain seems to disappear into the sand under the bricks or be funneled into the canals that criss-cross the land. Wet one moment, dry the next. Not so this year in Iowa, where the rain ran off the fields of corn and soybeans, flooded creeks and rivers, shut down interstate highways, and washed away whole Iowa towns.

Rain water is not a surprise to the Dutch. I guess if your real challenge is the North Sea, from which one third of the country is daily rescued with dikes and canals and modern-day windmills, a few drops from the heavens is hardly a national crisis.

What about those windmills? What happens in the rain to those big sails?

‘The rain doesn’t matter. The sails can get wet. It is not the rain that concerns the miller, it is the wind that follows a rain.’

Hennie van der Lilie, the miller for the Molenseum De Valk, is a tall, lean man with an easy smile who has worked windmills for 40 years.

‘A big part of our job is to determine how the weather develops.’

Great. But what if you get caught having to climb those sails in a rainstorm?

‘A younger colleague of mine once said, ‘A good miller never gets wet.’‘

Okay, I get it. According to the Dutch, either I can trust that most of the rain will fall next to me, or I will be just fine getting soaked because I will eventually dry, or I will miraculously avoid the rain today as a good miller would.

Yup, I think that covers all the bases.

Although, as I get on my wet bike to ride away in the wet rain in my already wet clothes, another Dutch saying finally makes sense — riding in the rain does in fact feel like two fingers in the nose.

This article was first published on joesneighborhood.com.