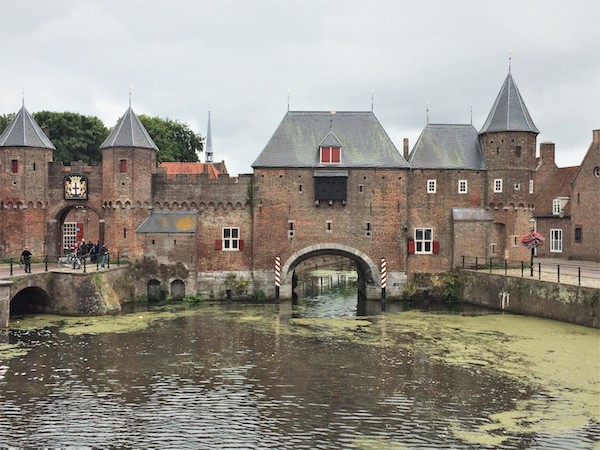 Home of monastic miracles and medieval architecture, but also birthplace of Mondrian, icon of Dutch Modernism, Amersfoort, in Utrecht province, is a rich blend of the new and the old with plenty to discover.

An unexpected guide accompanies us on our 15-minute walk from the station to Amersfoort’s historic centre. ‘Sofie’ – as she is known – steers us through the city’s trafficky outskirts, her iconic swishing ponytail and stout mini-skirted form illuminated in red and green on the traffic lights and moulded in metal on pavement arrows pointing the way.

Sofie has been welcoming visitors to Amersfoort since 2000 and now features in several other nearby cities. With her help, we soon find ourselves in the city’s medieval centre, where we appear to have passed into a different world. On the Westsingel canal, in the shadow of the Onze Lieve Vrouwe church, a boat laden with laughing locals in historical costume is launching, while just behind it, the bar terraces on the square are humming with lunchtime trade. 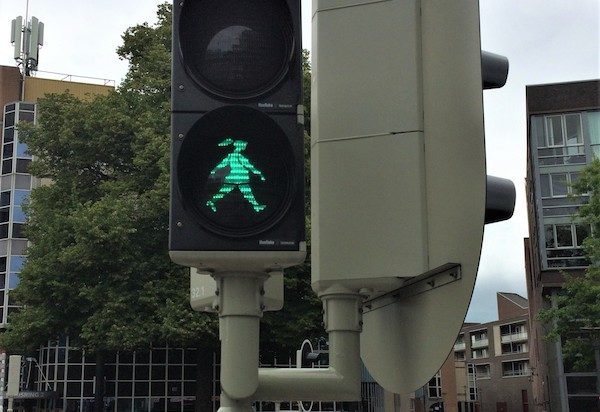 For a town with just 150,000 residents, Amersfoort and the surrounding area is bursting with things to do. If you’re planning an extended stay, families can kill a whole day at Amersfoort Zoo (€20 for 3-12-year-olds; €24 for 13+), which includes a dinosaur park with giant teeth-baring dinosaur models.

Nature enthusiasts should pack their binoculars and spotter’s guide and head to Bloeidaal, just east of the city. This area of marshes, flowery meadows and reedlands was renatured around 10 years ago and is now an ornithologist’s paradise, attracting – among others – kingfishers, curlews and redshanks.

But perhaps, like us, you’ve got just one day. If so, here are a few suggestions.

Make a Mondriaan
A stroll clockwise (north to south) following the attractive shuttered Muurhuizen (wall houses), and then a right into the Kortegracht, a pretty tree-lined canal decorated with colourful hanging baskets, takes you to the Mondrian House, the former home of Mondrian, legend of the De Stijl and Neoplastic art movements.

This museum of his life and works displays many of Mondrian’s surprisingly conventional early pieces, ranging from charcoal sketches of flowers to landscapes in oil. We enjoyed exploring the walk-in mock-up of his Paris studio, and the last room – a huge atelier – had us occupied for ages creating our own Mondrians with paint, coloured paper or lego. 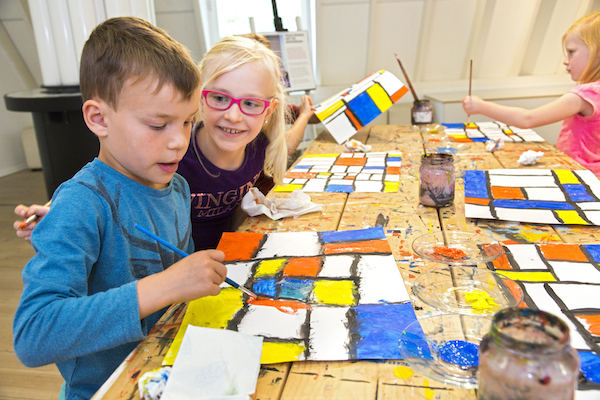 Gawp at a gate
In the north-west corner of the old town, the turreted 15th century Koppelpoort spans the river Eem. Recipient of a heritage award in the 1990s for its immaculate restoration, it’s the most impressive of the three surviving gates to the city. A pre-booked tour (€4) buys you entrance to the interior and a chance to experience the treacherous task of wheel turning, when prisoners were forced to walk in the gigantic wheels to open the city gates.

Experience a vision from above
For a view of the whole city and beyond, climb the 346 steps to the top of the 98m-high Onze Lieve Vrouwe Tower, built around 500 years ago on the site of an alleged miracle involving a nun, a clay figurine and the River Eem. Tickets (€2.50) include a guided tour and are available online or from the tourist office next door from April to October. For the opposite perspective, walk five minutes to the Waterlijn office at Krommestraat 5 and book one of the many boat tours offered (from €5).

Explore history through man-talk and musea
The Mannenzaal is a former infirmary in a 14th century chapel which later became a retirement home, first for both men and women and later only for men. If your Dutch is good and you are open to a quirky experience, visit in July and August when €3 entry to the bedstee-lined room includes an encounter with role-players eager to tell you about their lives in the early 1900s (in Dutch). 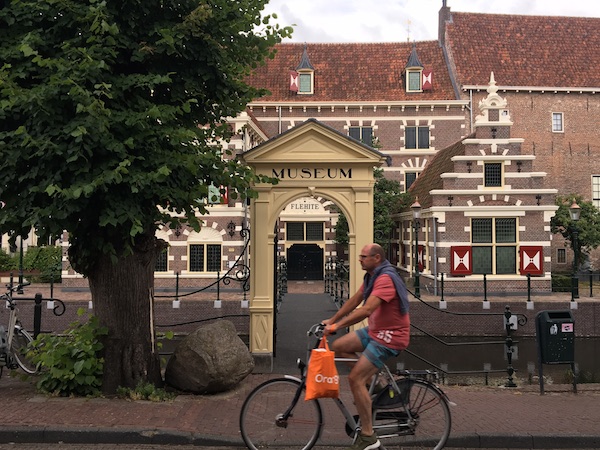 If this sounds a bit much, take the footbridge across the water to the three adjoined buildings that make up the stunning Flehite Museum (€16 adults; kids free), and explore Amersfoort’s history through archived material and artworks instead.

Go shopping
On Saturdays, the Hof, a huge square in the city’s core, hosts a market which sells almost everything – and at very competitive prices. We bought retro sweets at a confectioner’s, whose multi-coloured wares had both adults and children entranced; and at the cheese stall we found the perfect boerenkaas – dotted with minute crunchy salt crystals, but with a smooth, creamy taste.

The Krommestraat, nearby, has resisted the chain stores that you’ll find on the perpendicular Langestraat, and has some interesting shops such as independent chocolatier Sweet Sisters, and Marklin, a specialist store for model train enthusiasts.

Where to eat and drink
We slipped down an alleyway to the car-free Krommestraat and found a seat at one of the long wooden benches in front of Corazon Coffee. A huge playroom upstairs with an electric train took care of the children, while we perused the menu where poffertjes, thick slabs of cheesecake and an astonishing 20 types of iced coffee were offered alongside healthy options such as filled wholegrain pitas and salads. 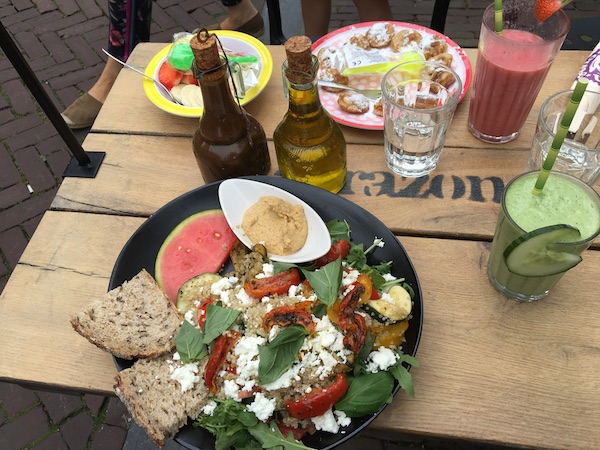 Also on the Krommestraat, but with romantic little terraces overlooking the canal, are fancy fish restaurant De Vis Zaeck , Italian eatery Ristorante San Giorgio and relaxed gastrobar Sloop. For a more edgy, urban dining experience, head north-east and check out microtown De Nieuwe Stad. This new community of businesses, restaurants and venue spaces is one of Amerfoort’s trendiest dining spots with choices to suit all budgets.

In the Middle Ages, Amersfoort had a thriving beer industry due to its superior water quality. The Drie Ringen (open Tue-Sun afternoons and closing early evening), has been helping revive this tradition since 1989, still brewing with the local water, and offering tasting sessions and tours (€12.50 pp). You don’t need an appointment to cram in alongside the copper still and swig back beer with the locals. Ask for a Vuurvogel (Firebird) if you fancy sampling a traditional medieval Amersfoort brew. 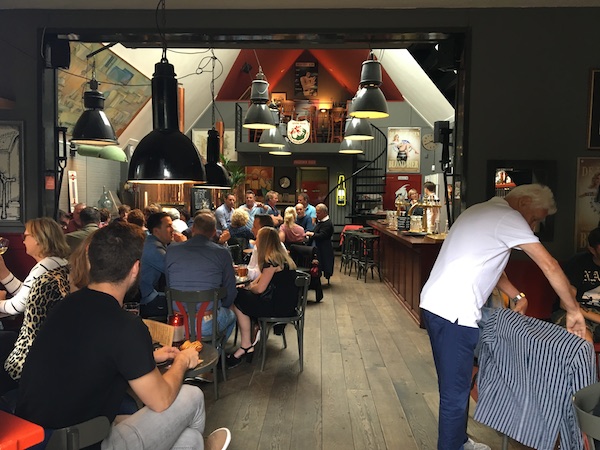 Where to stay
There’s not a huge choice of accommodation in Amersfoort and no bargain hostel options. Chains such as the NH Hotel (doubles from around €85; breakfast €15.90) and the Mercure Hotel (doubles from around €75; breakfast €16.50) sleep the masses just outside the old town, but for something more characterful, try smartly decorated B&B Innegentienvijf (INV). Located in a pretty back street in the heart of the city, its two light, spacious doubles cost from around €115, including a generous breakfast brought to your room.