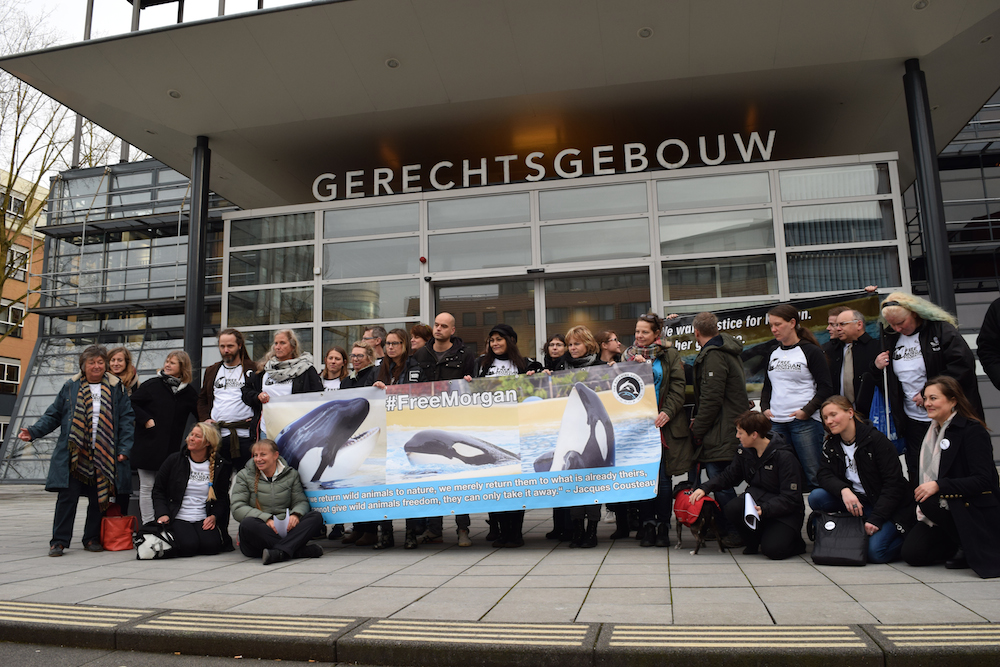 On Wednesday, the highest Dutch administrative court will hear legal arguments in the case of the wild-born orca know as Morgan, who was captured in the Wadden Sea and now languishes in Spanish tourist attraction. The Dutch government is to blame for her plight, say Matthew Spiegl and Dr Ingrid N Visser.

Infringement of EU law  – including wildlife law – undermines the very foundation of the union. When acts of infringement are alleged, they must be acknowledged, addressed and resolved without excuse or delay.

The Dutch government’s institutional ignorance of union law and international conventions governing the trade in wildlife will be on ‘public display’ in the legal proceedings brought by the Free Morgan Foundation against the ministry of agriculture, nature and food quality on May 29.

The plight of captive cetaceans (whales, dolphins and porpoises) is subject to increasing scrutiny by enlightened nations as well as international academic and legal circles.

The Dutch government’s flagrant infringement of wildlife law in the case of Morgan is chronicled in depth in a new article which highlights the mishandling of Morgan by officials and the courts.

In June 2010 when a young orca was captured in the Wadden Sea, no competent person au fait with the relevant provisions of wildlife law would have imagined the tragic tale and trampling of Morgan’s rights that has ensued.

In the years that followed Morgan’s capture, the Dutch government (through the actions of four successive ministers – Henk Bleker, Sharon Dijksma, Martijn van Dam and now Carola Schouten) has been duplicitous in ignoring EU law. It has allowed the sale and commercial exploitation of Morgan, resulting in her unauthorised breeding and the subsequent birth of her wild-captive hybrid calf in September 2018.

How did the Dutch government let this happen?

On 23 December 2011, MPs submitted written questions to Henk Bleker, the responsible minister at the time, asking: ‘What steps are you going to take to prevent Morgan from being used in a breeding programme, as according to your statements…  this was not the basis for the permit you granted that made the move  to Loro Parque possible?’

Bleker evaded answering; dismissively ignoring the fact that breeding wild-born orcas must be pre-authorised. In his response dated 17 February 2012, Bleker stated with feigned naivety ‘the news that the orca has found a connection with others of her own species is good news’. But that is not the legal standard.

On 31 January 2014, the Free Morgan Foundation asked Bleker’s successor Sharon Dijksma about the involvement of the USA theme park group SeaWorld with Dutch and Spanish theme parks with regard to the sale and ‘ownership’ of Morgan, who as a wild-born individual was afforded special protection.

On 12 February 2014, Dijksma wrote to the FMF stating: ‘To determine who is the real owner of orca Morgan also depends on the intentions of and agreements made by the private parties involved in this case – Dolfinarium Harderwijk, Loro Parque and SeaWorld.’

Dijksma’s rationalisation is the antithesis of the law’s intent that private parties may not secretly buy and sell protected species.

On 9 November 2015, the FMF wrote to Dijksma’s successor Martijn van Dam about SeaWorld’s involvement in the unauthorised sale, exploitation and potential breeding of Morgan.

On 26 November 2015, MP Marianne Thieme followed up with a written parliamentary question: Did you receive the letter of Free Morgan Foundation, which shows that the Loro Parque animal park intends to breed with the wild born orca Morgan, while this is contrary to the law?

However, on 2 February 2016, a spokesperson for Van Dam stated: ‘When Morgan the orca was transported to Loro Parque, the Dutch authorities lost their jurisdiction over Morgan, and this includes any possible intention on the part of Loro Parque to breed Morgan.’

On 26 April 2018, the district court in Utrecht ruled the Dutch government (namely the agriculture ministry which now has responsibility for captive animals) does retain jurisdiction over Morgan despite her movement to Loro Parque – Morgan was not ‘transferred to Spain’. She was moved within the European Union under the direction of the Dutch government.

Now agriculture minister Carola Schouten has an opportunity to right the terrible wrong that has befallen Morgan. Morgan’s case will soon be before the highest Dutch administrative court, where the flagrant misinterpretation of EU law on the ‘breeding’ of Morgan will face scrutiny.

Schouten can direct the ministry to make amends for the injustice that has befallen Morgan and work to facilitate the transfer of Morgan and her calf to a sea sanctuary.

Matthew Spiegl is the legal counsel for the Free Morgan Foundation and Dr Ingrid N. Visser is the foundation’s chair and scientific advisor.

If you are interested in attending the hearing or learning more about this appeal, the FMF has created an event page on Facebook: https://www.facebook.com/events/1316904551808767/