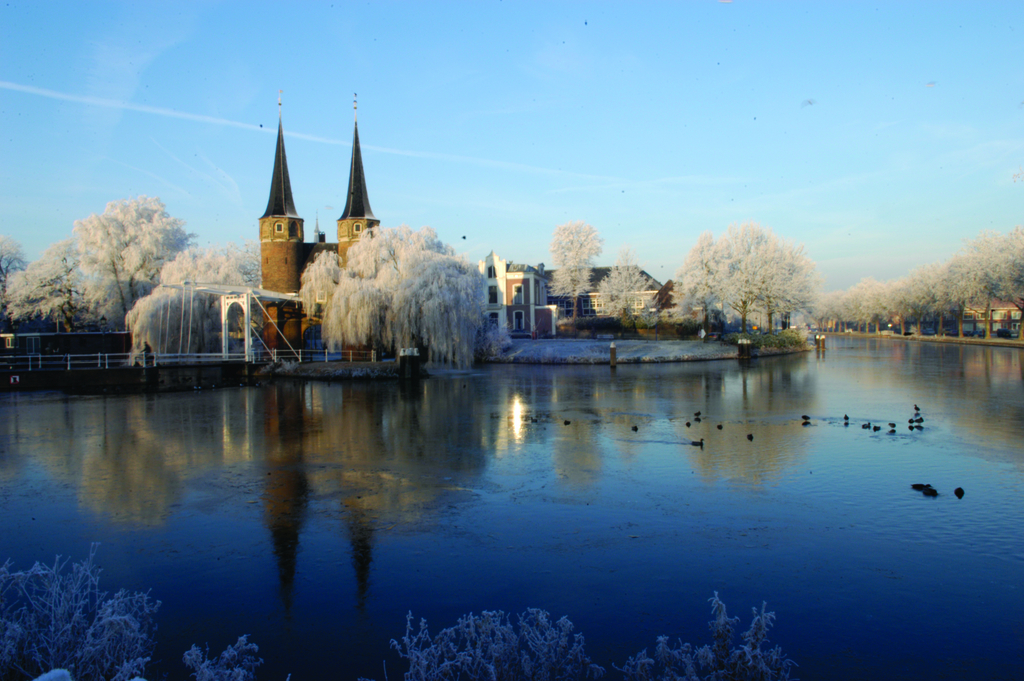 Best known for its pottery, the city of Delft offers plenty of quaint streets to wander through and some delicious places to eat. Molly Quell lives there and tells you why you should visit.

Delft’s reputation is one of polar opposites. It’s picturesque, quaint and adorable, but it also boasts the oldest and largest university of technology in the Netherlands and the largest start-up incubator in Europe. You can’t walk through the city centre without bumping into houses from 1500 and multiple PhDs.

With a population of just over 100,000, Delft teeters between being a city, like its close neighbours The Hague and Rotterdam, and a village. You’ll bump into your boss, your friend and the dentist’s assistant in Albert Heijn, but you can always get home from a late night in Amsterdam with the night train.

With its rich and interesting history, Delft’s beautiful cityscape offers plenty to look at as you wander. But there’s also an active nightlife, interesting museums and lots of good beer.

Five great things to do

Take a boat tour
To get an overview of the city, start off with a boat tour. Unlike the impersonal tours in Amsterdam, the only boat company in the city employs local students as guides, which can mean you pick up some interesting tidbits about the city. The tour passes through most of the old city centre and even takes you on a jaunt out onto the Schie. You can find the Rondvaart Delft on the Koornmarkt; tickets costs €8.50 for adults and €4 for children. The tours operate every day from April to October. 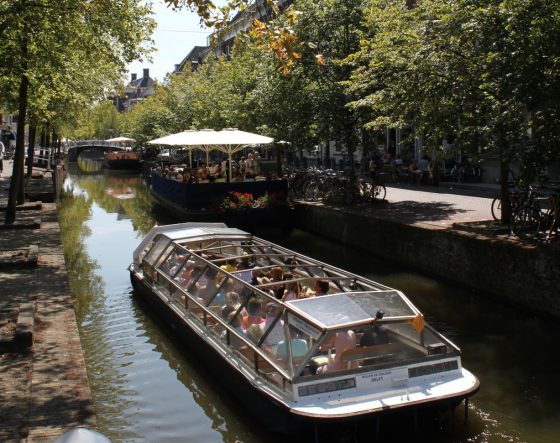 Walk
Once you have familiarised yourself with the layout of the city and taken in some of the basic history during the boat tour, disembark for a stroll. Delft received its city charter in 1246 and was mostly untouched during World War II, leaving the centre as quaint as a Vermeer streetscape. Speaking of which, checking out the location of The Little Street is a good first stop on your tour. Take a picture in front of the Delft Blue Heart and move on to the Markt Square, where you can see both the New Church and the old city hall. Other highlights include the Oostpoortbrug, the last remaining city gate; the still functioning windmill; and the statue of Hugo Grotius.

Climb the Nieuwe Kerk
The Nieuwe Kerk, built between 1396 and 1496, is the final resting place of the royal family. You can walk through the church itself and, if you can screw up the courage, climb the 376 steps to the top of the tower. On a clear day you can see both Rotterdam and The Hague. 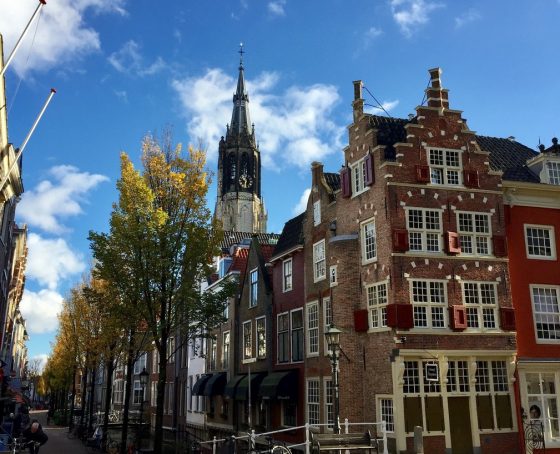 The new church is the newer of the two large churches in Delft, the other obviously being the Oude Kerk – that’s the church with the leaning tower. The tower is closed to visitors are not permitted to climb that tower, but you can go inside and see where Johannes Vermeer is buried. Tickets for both churches and the tower cost €8 for adults and less for children, depending on their age.

Visit the Prinsenhof
The next stop is the Prinsenhof Museum, where William of Orange was assassinated. Yes, you can still see what they tell you is the bullet hole in the wall. The museum also has a collection of Delft Blue pottery with a good explanation of its history. 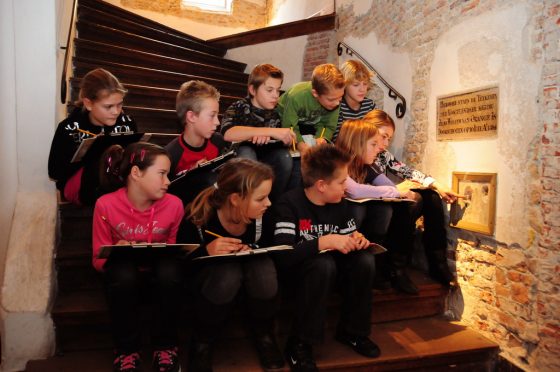 For a more in-depth view and to see craftsmen hand painting the pottery, head over to Royal Delft. After a tour of the museum, take a stroll in the garden, which was formerly the garden back in the days when the building was used as a convent. Then venture across the courtyard to the Shop van Kouwenhoven, an old-fashioned candy store.

Drink beer
You might think the whole craft beer thing has taken over, but the number of breweries is nowhere close to its 15th-century peak, when Delft had some 200 beer producers. These days, there’s an extensive choice of beer cafes. De Klomp is the older cafe in the city, and, though it specialises in the most famous Dutch drink, jenever, it also offers a wide selection of craft beers. Other options include the Doerak, the Klooster, Proeflokaal or Locus Publicus. If you’re looking for something to take back home with you, check out Flink Gegist, which has one of the largest selections of beer in the country. If you’re looking to combine your drinking with something a bit more educational, Bierhistorie Delft offers tours explaining the history of the industry in the city.

Where to eat
Delft has a pretty good selection of restaurants, so long as you stay away from the tourist spots on the Markt Square. For an inexpensive dinner, Malee, a Thai restaurant, serves a delicious prix fixe menu, while De Beierd has a daily menu option ranging from around €8.00 to €18.00, with generally Dutch cuisine plus the occasional Indonesian dish. Stick to the daily menu there, it’s better than the regular menu. 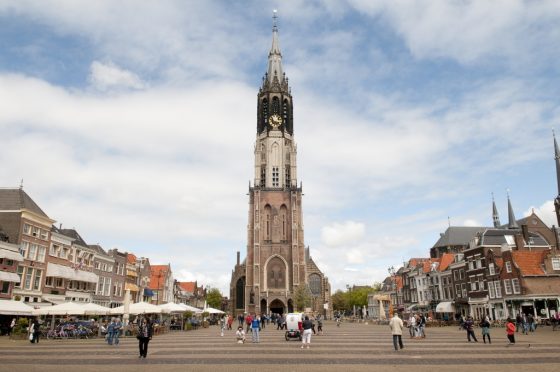 Avoid the tourist cafes on the market square. Photo: Holland.com

For a more formal meal pop into Cafe Einstein, just outside the city centre, which offers an Italian-inspired menu, or De Pelicaan with its Mediterranean menu. Both are delicious. Try the fish at the former and the meat at the latter. If you really want to treat yourself, Le Vieux Jean is a French restaurant in the shadow of the Oude Kerk with an amazing French menu and a fabulous wine list. For lunch or a coffee, Kek is a local favourite. It’s also a great place to get a gift for someone back home.  Michel’s, a French bakery is another top tip. Delft even has its own cat cafe, the Kattenkop Cafe, which has some very sunny outside seating if the weather is nice.

Where to stay
At the Hotel de Emauspoort you can have your pick of any number of themed rooms, such as the Johannes Vermeer, the William of Orange. For an even more unusual experience you can stay in one of the hotel’s two caravans. There are also more conventional rooms, all of which are cosy and come with breakfast included. An alternative is the Hotel Grand Canal, which, as you can guess from the name is located directly on a canal (though Hotel de Emauspoort is located on a canal as well.) The rooms are a bit more modern and spacious.

How to get there
Parking in Delft may not be quite as bad as the city centre of Amsterdam, but it is not easy. The city has a number of parking garages on the outskirts, which are your best bet if you’re going to drive. However, now that the renovation of the train station is finished, the most convenient way to reach the city is by train and on foot.