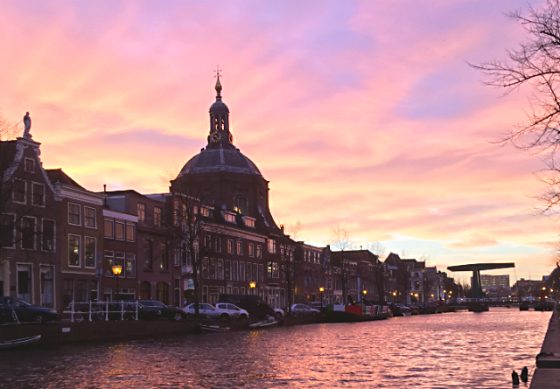 Once considered a broken down, blue-collar burg, Leiden has shed this reputation in recent years to become a sort of ‘mini Amsterdam’. Brandon Hartley shares a glimpse at one of the most often overlooked cities in the Randstad.

At first glance, it might be easy to mistake the canals of Leiden for those in Amsterdam’s Jordaan district. They’re lined with picturesque houses, arched bridges, and the occasional house cat snoozing in the sun. While the city lacks the world famous museums and bustling nightlife of the real deal, it’s also a welcome refuge from the stag parties and tourist hordes that have laid claim to the nation’s capital.

It’s also a city rich with history. Leiden is the birthplace of Rembrandt and was once home to the American Pilgrims before they hightailed it to the New World. In 1574, its brave citizens managed to withstand a months-long siege by the Spanish. They were later rewarded by King William of Orange with their very own college. Leiden University’s alumni list includes prime minister Mark Rutte, former Queen Beatrix and her son, Willem-Alexander. Albert Einstein also lectured there in the 1920s, which is why one of Leiden’s most popular taverns was named in his honour.

The city was in decline and unemployment was high throughout much of the 20th century. Over the past generation, however, Leiden has bounced back and it’s a great place to visit for both history buffs and those looking for a weekend away from the hustle and bustle of the country’s larger communities.

Hortus Botanicus Leiden
Dating back to 1590, this botanical garden is the oldest in the Netherlands. You’ll find gigantic water lilies among the 60,000 plant specimens among its indoor and outdoor exhibits, which include a small Japanese garden. One of the Hortus’ ‘crown jewels’ is a Titan arum, a rare plant that’s native solely to western Sumatra in Indonesia. It gives off a notoriously foul smell when it’s in full bloom. 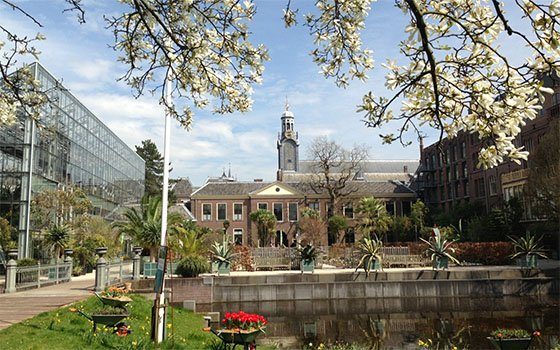 Burcht van Leiden
Located on a man-made hill in the centre of the city, this fortress dates back to the 11th century. It’s a great place to take in a 360 degree view of the city and the nearby Hooglandse Kerk, a gothic church built in the 15th century. Over the years, the Burcht has served as everything from a water tower to a stronghold for Ada van Holland, a 12th century countess who got into a bitter battle with her meddlesome uncle over her title. These days, the hill and the fort are used for public events, picnics, weddings, and sledding whenever it snows.

Wander the streets
Leiden is home to a series of gorgeous canals and cobblestone streets. The ones near the Pieterskerk, the final resting place of several American Pilgrims, served as stand-ins for Amsterdam in The Miniaturist. Pop into the nearly unpronounceable ‘t Suppiershuysinghe for a koffie verkeerd if you need a break. This centuries-old cafe is the very definition of gezellig but the adjacent public square’s blood-soaked history is anything but (it was used as an execution grounds for the neighbouring prison). Also keep an eye out for Leiden’s wall poems. At the last count, there are 110 of them all across the city.

Naturalis
This research centre and natural history museum is best known as the home of Trix, one of the world’s most complete Tyrannosaurus Rex skeletons. At the time of  writing, she’s on tour and will be making stops at museums in Barcelona and Paris before returning to Leiden in 2019. Naturalis is also undergoing renovations but it’s open to the public and currently hosting an exhibit about poisonous animals. 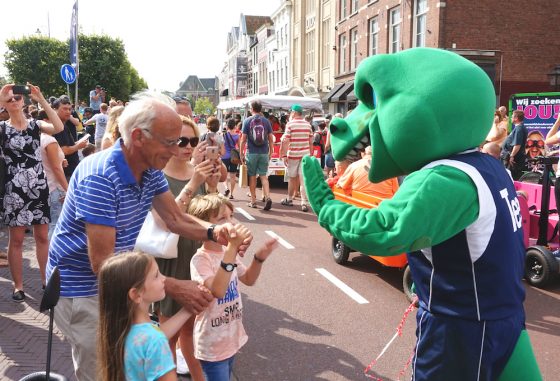 De Valk
Fully restored in 2000, this majestic 18th century tower mill currently serves as both a museum and Leiden’s centrepiece. It’s another great spot to take in a panorama of the city or learn more about the inner workings of windmills. De Valk also features living quarters that contain original furnishings and decor.

Where to Eat
It’s tough to find a decent bagel in the Netherlands but Leiden is home to the country’s first traditional bagel bakery. Proprietor Frank Zweerus and his crew at Better Bagels specialise in making them fresh each day and often break out themed-ones inspired by everything from Pokemon to Maria ‘Goeie Mie’ Swanenburg, the notorious serial killer who killed dozens of innocent Leideners in the late 19th century.

It’s a great place to stop for lunch but, if you’re on the go, Mamie Gourmande is another option. This authentic French bakery is one of the very best in the lowlands. Stop here for a delicious sandwich or a take-away quiche along with a frosty Orangina. There are also plenty of freshly-made croissants, macarons, and eclairs up for grabs. If it’s a Saturday, check out Leiden’s nearby outdoor market, which has been going strong for over 900 years. Vishandel Atlantic owns a stand and they’re among the top contenders for the coveted ‘best herring’ award every year. 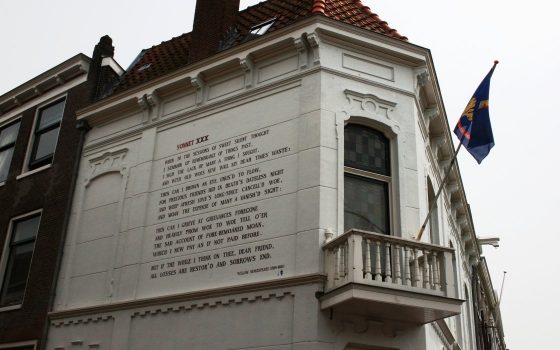 One of Leiden’s many wall poems. Photo: Holland.com

The Bishop, a bistro located in an historic building that once served as a brothel, is where to head for ‘hip’ international cuisine. For more family-friendly fare that won’t break the bank, there’s Oudt Leyden, a beloved cafe stuffed full of ‘Old Dutch’ decor that’s been around since 1907. Over the past century, they’ve served Dutch-style pancakes to Charles de Gaulle, Sir Winston Churchill, and members of the royal family.

Where to Stay
The Golden Tulip owns two side-by-side properties near Leiden Centraal station; the four star Hotel Golden Tulip and the more low-key Hotel Tulip Inn. For a more unique experience, book a few nights at the historic Nieuw Minerva. Located inside a 16th century canal house, a few of its rooms feature some truly extraordinary beds. The Rembrandt Room contains an exact copy of a gorgeous box bed once owned by the artist himself.

How to Get There
Leiden is easy get to by train and you can be standing in Leiden Centraal within 15 minutes of departing from Schiphol Airport. Making the journey by car along the A44 from Amsterdam takes about 45 minutes. If it’s springtime and you’re feeling limber, you can also cycle down from Amsterdam through the tulip fields outside the city and make a pit-stop at the world famous Keukenhof. A non-stop journey via bike from the nation’s capital takes a little over two hours. 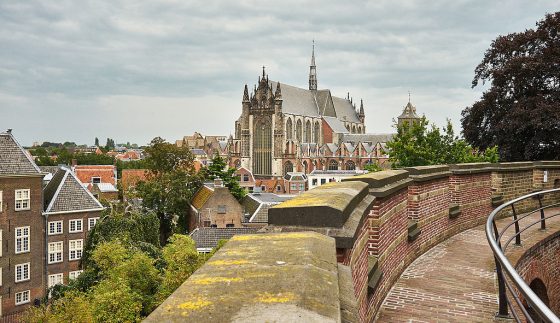 The Hooglandsekerk, seen from the Burcht fortress. Photo: By Michael A. Echteld via Wikimedia Commons

When to visit?
Much like the old cliché claims, just about anytime is a great time to come to Leiden. Every spring, the SieboldHuis museum hosts an incredibly popular Japanese market to honour a visit made by the country’s emperor in 2000. The annual springtime Lakenfeesten feature a whimsical boat parade that’s always guaranteed to be a hoot. The Leiden International Film Festival, which takes place in the autumn, keeps getting bigger and better with each passing year. The city also hosts a floating Christmas market with an ice rink during the holiday season on a canal located mere footsteps from its monumental stadhuis.

But Leiden is best avoided during its notorious 3 Oktober celebrations. The city is invaded for several days by rowdy crowds on the prowl for carnival rides, ear-splitting dance music, and tons of cheap Amstel pilsner. Some people love it, some people loathe it and, if you can’t stand drunken revelry, stay away.