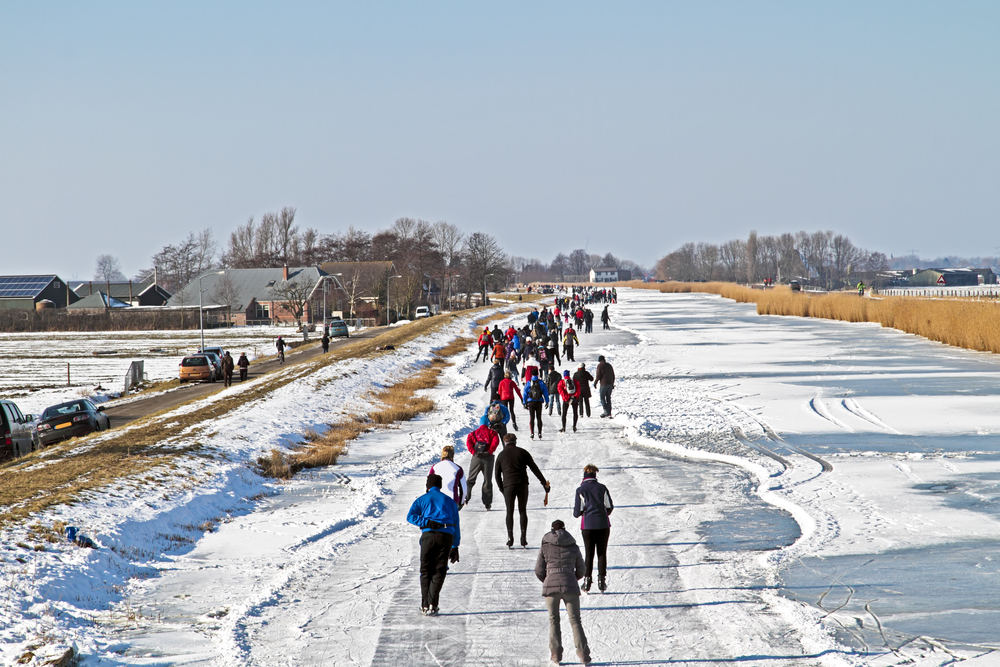 A keen skater back home? Do not think the fact you can do a triple lutz or a double toe loop will be appreciated. The Dutch have been forced onto skates almost as soon as they can walk and they are into distance and speed, not kunstschaatsen.

1. Will it freeze?
As soon as it starts to get cold – like now – the Netherlands is overtaken by ice fever. It starts with the television weather forecasters, but after a few days everyone is at it. How much did the ice grow last night ? Will it snow and spoil everything? After a few days of this, the question on everyone’s lip is ‘Will there be an Elfstedentocht (the 200 km 11 city ice marathon)?’. We’ve not gotten quite that far this year because everyone knows the thaw is about to set in.

2. Technique
Without natural ice, skaters have to make do with artificial outdoor tracks which are usually open from October to mid-March and get very busy on sunny days. Rent skates and take lessons if you want to show off a perfect pootje over – the long low cross-over glide which distance skaters use to effortlessly take corners. Staggering around the ice clutching your mates or, even worse, a chair is strictly for the under fives.

Schoonrijden, a slow-glide form of outdoor skating, sometimes in national costume, has been included on the Dutch national heritage list.

3. The first marathon on natural ice
When the temperature drops, speculation starts about the prospect of the first marathon on natural ice. The Netherlands has some 200 ice clubs who go all out to create outdoor ice rinks – by spraying a concrete track with water – when a spell of frost is predicted. The competition to stage the first marathon –  some 125 circles of the track – is usually a race between the ice clubs in Noordlaren (Groningen),  Veenoord (Drenthe) and Haaksbergen (Overijssel). This year (2017) the honours went to Noordlaren. You can find out which natural ice rinks are open here.

4. It giet oan
An essential Friesan phrase to show you are in the know about skating. It giet oan – literally ‘it’s on’ – is the triumphant way of announcing that an Elfstedentocht will take place. However, seeing as that last happened 20 years ago, it now tends to be used whenever the ice is thick enough for some sort of race.

5. The lure of skating outdoors
If you are in the Netherlands during a cold snap and the canals and lakes outside the city are frozen over, you are a lucky person indeed. There is nothing like gliding over smooth natural ice – skating over frozen canals and rivers, passing islands and through reed beds. 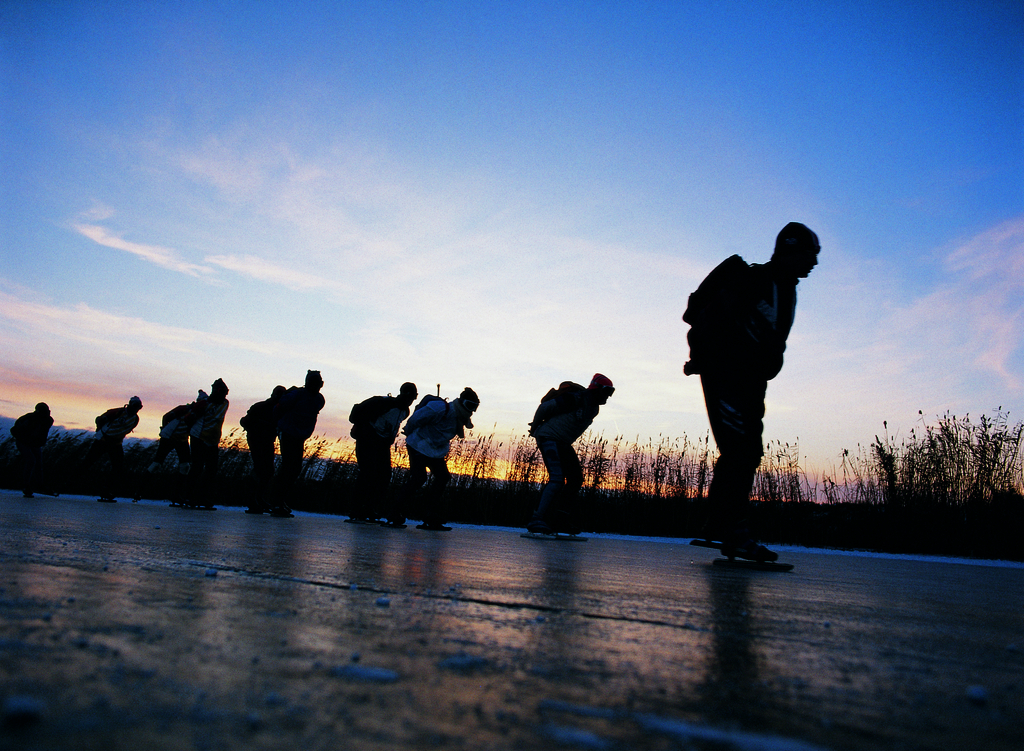 The Dutch skating union keeps a careful watch on when and where it is safe to skate outdoors. You will need to bring your own skates – and make sure they have been sharpened to cope with all the hobbles and bobbles in the ice. You will, of course, blunt them when you scramble over bits (it’s called klunen) where the ice is too awful or a bridge.

Popular skating centres will have formal routes ranging usually from 10 km to 40 km which you can follow. 40km is a long way when a bone-chilling northeasterly wind is blowing.

6. Koek en zopie
Koek (biscuits) and zopie (something to drink) are an essential part of outside skating. Today zopie is usually hot chocolate or pea soup but the word is thought to come from zuipie, or tipple, and used to refer to a generous slug of jenever, or Dutch gin. Necessary after spending a few hours in that northeasterly wind. 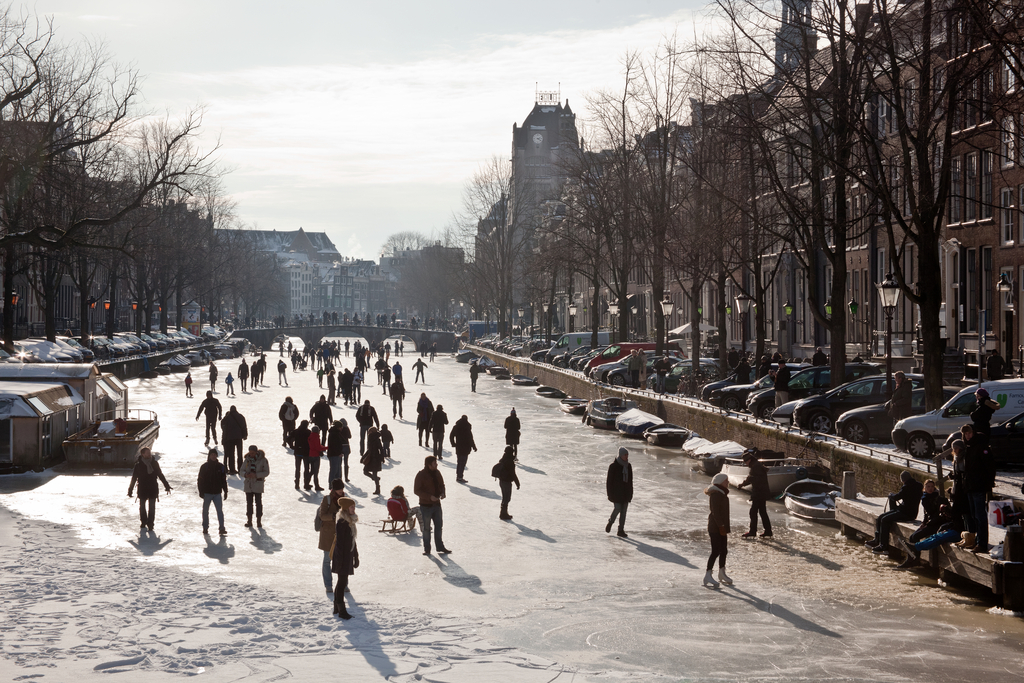 7. Yippee, extra holidays
If someone is ijsvrij – literally ice free – it does not mean they have been defrosted, but that they have been given an extra day’s holiday to enjoy some skating. Traditionally school children and workers would be given a day off if the roads were too dangerous because of snow and ice or it was too cold to work. But since the end of the last century, some companies have been giving staff time off for skating as a gesture of generosity. Well, it is either that or have nobody turn up anyway.