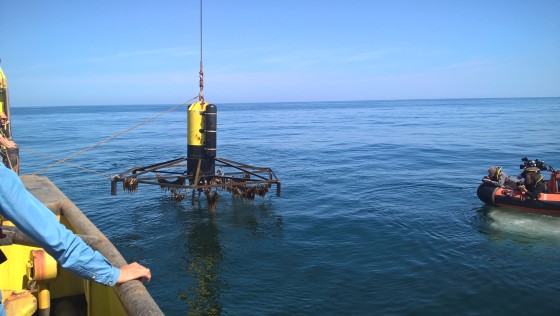 One enterprising Dutch firm is attempting to commercially farm seaweed and the initial results indicate it may be possible, writes Esther O’Toole.

Do you eat seaweed? No? Are you sure? Only around sushi? Well, think again. Seaweed is found in many consumer products from ice cream and processed foods, to vitamin supplements, toothpaste, mascara and biofuel.

What is more, being a sustainable crop, it reduces fresh water, land and fertilizer usage. This versatile and tasty resource is drawing a lot of interest in international agricultural circles, including one prominent Dutch enterprise, The North Sea Farm Foundation (Stichting Noordzee Boerderij). North Sea Farm have been testing the nutrient rich waters north of Texel, with a view to getting seaweed on more Dutch plates in the very near future.

Initially set up by Marcel Schuttelaar, of Schuttelaar & Partners, the foundation launched a proof of concept mission last November. Using two different growing platforms (one static, one flexible) and two varieties of edible kelp, they set out with the purpose of discovering whether the rough North Sea was suitable for this kind of offshore agriculture.

This month’s first successful harvest seems to indicate that it is. Having laid 10 metres of line in the hopes of growing one kilo of usable product, they ended up with 15 kilos.

North Sea Farm’s Koen van Swam says the partly crowdfunded project is now heading towards scaling up. The June crop is being independently tested for nutritional value and consumer safety and a second harvest is planned for October.


Seaweed cultivation can work in harmony with both nature and existing offshore industries like fisheries, sea energy and conservation. The North Sea is a challenging spot to cultivate with waves that vary in size from one to a whopping six metres high, which can sometimes make access to the platforms difficult. However, unlike more sheltered European growing areas (for instance in Norway and The Shetlands), the North Sea offers real space to spread out.

The seaweed industry, he says, offers the chance for entrepreneurs from many traditionally strong Dutch trades, such as maritime transport, fishing, mussel farming and agrofood, to collaborate. North Sea Farm expects to help create jobs and offer ‘fantastic growth potential’ for all partners across the supply chain. 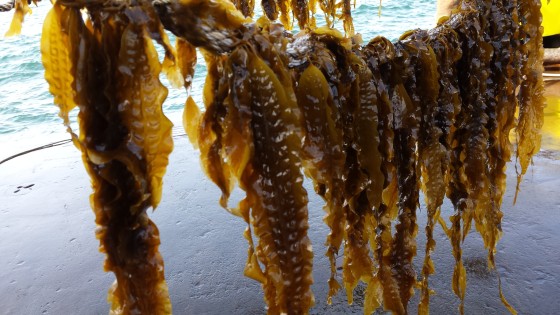 This year the global seaweed market for human consumption was estimated at nearly $6m. The Dutch government is conducting research of its own and has estimated there is scope for up to 400 square kilometres of seaweed fields off the Dutch north coast by 2050, with no discernible negative impact. Seaweed is regularly used by fish as a nursery, so the impact could in fact be a positive one.

North Sea Farm is equally ambitious as it sets out to raise in the region of €400,000 for expansion, hoping the green initiative’s early success will encourage new investors. That amount would allow them to grow 5,000-10,000 kilos of seaweed by next season. And to make sure the Dutch consumers know what to do with this superfood, they are also working on a cookbook.