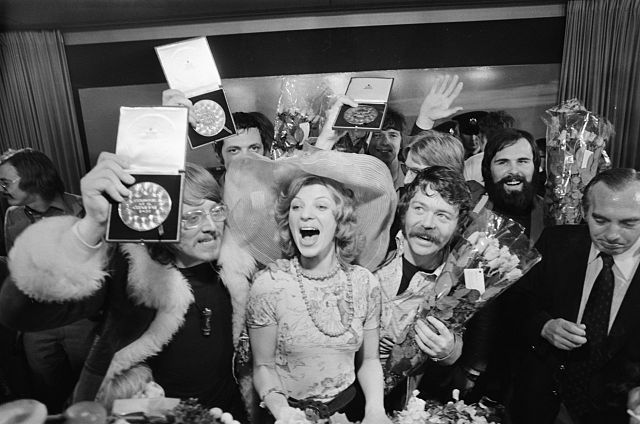 The last time the Netherlands won the Eurovision Song Contest was 40 years ago,  when Teach-In took the honours with the infamous ‘Ding-a-dong’. Singer Getty Kaspers talks to DutchNews.nl about Eurovision then and now.

‘Ding-a-dong every hour, when you pick a flower, even when your lover is gone, gone, gone.’ So goes the kitschy but catchy chorus of Ding-A-Dong, the song that, 40 years ago, made Teach-In Eurovision champions.

The song – in stark contrast to the quieter ballads put forth by hopefuls representing the Netherlands in recent years, including this year’s Walk On penned by Anouk and performed by Trijntje Oosterhuis – is a 2.5-minute explosion of infectiously upbeat, xylophonic sound accompanied by quirky, nonsensical lyrics earnestly sung by Getty Kaspers.

Kaspers, who was 27 when the song won Eurovision in 1975, says the competition was rather different in those times. ‘It was easier,’ she says. ‘We only had to perform once before being selected to go to the competition, and then only once while there. Today there is more pressure on the performers. We were able to just have fun.’

But although she and her band mates thought they had a good enough song to win, they were not as aware of the competition as artists are today, and had less time before the programme’s broadcast to develop an audience.

‘There was no Internet then, no cable television,’ she says. ‘It was a very different time. If you wanted to hear a song, you had to wait for it to come on the radio, or maybe we would be mentioned sometimes on the news.’

Voting was also more straightforward in 1975, Kaspers says, and the contest was generally less political. ‘Things are different now with the audiences telephoning in their votes and the obvious alliances – we always know which countries will give their votes to which neighboring countries,’ she says.

Teach-In formed in Enschede in 1969, with Kaspers joining in 1972. By the time they were chosen to go to Eurovision in 1975, they had already had 15 hits in the Netherlands, but were relatively unknown beyond Dutch borders.

After taking the Eurovision title, Ding-A-Dong appeared on the charts in nearly every European country. The sudden fame caught Kaspers by surprise. ‘We went on tour to England, and everyone knew us,’ she says. ‘I couldn’t even go out to the supermarket.’

She recalls the celebrity treatment: ‘It was really funny to be in England for the first time and have everyone know us. We were driven around in beautiful Bentleys – I was waving like the queen.’

But, she admits, this was fleeting. ‘The next time we visited London, we travelled by bus.’

Kasper left the band in 1976, and the rest of the members called it a day two years later. Still, they remain among the ranks of Eurovision winners such as Abba, Bucks Fizz, Celine Dion, Tom Jones and Katrina and the Waves.

What it takes to win

This year is the third in a row that the Netherlands was represented by a relatively tame song, without the costumes and pyro technics for which the contest is celebrated. But Kaspers says the success of last year’s Calm After the Storm – the song took second place for the Netherlands – shows Eurovision is not all about gimmicks.

‘Last year the Netherlands had a very good song – even though it was rather a simple,’ she says. ‘If the song is really good, people will vote for it, even countries that don’t usually give you votes.’

But winning, according to Kaspers, also takes more than just good song writing. ‘Having a good song is part of it, but it’s also important to have a good performer who can really connect with the people at home,’ she says.

She says she always made an effort to form an intimate connection with the viewers. ‘I always pretended to be flirting with the camera, that the camera was one person sitting at home watching their television and that I was singing for them only. I think you can see that when you watch the performance.’

Walk Along failed to make the final this year, meaning Kaspers will continue as Holland’s reigning Eurovision champion, at least until 2016.

As for her own singing career, she looks back on it nostalgically and fondly, but says she hasn’t sung professionally in a long time.

‘My voice is lower than before,’ she says. ‘I am 40 years older, and I feel it. But people still get excited to see me and they don’t mind if I sound a little different from then. So I’m still asked to sing Ding-A-Dong.’