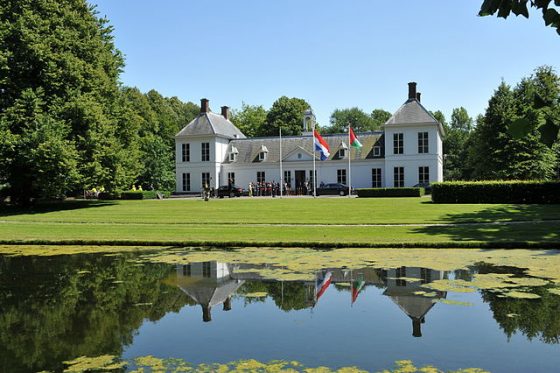 The Catshuis in The Hague. Photo: Office of Minister-President Rutte via Wikimedia Commons

Senior cabinet ministers are meeting at the Catshuis on Tuesday to discuss the ongoing problems around the accommodation of asylum seekers.

Prime minister Mark Rutte and the three deputy prime ministers from the other coalition parties will attend the talks in The Hague, along with asylum minister Eric van der Burg and justice minister Dilan Yesilgöz.

Asylum has been one of the thorniest issues for the current cabinet since it took office 12 months ago, with the four parties split down the middle. Van der Burg has also had his options limited by several defeats in the courts.

In the most recent ruling last month, a court said a Turkish refugee was entitled to be joined in the Netherlands by his family, who are nationals of Kyrgyzstan. It jeopardised a proposed freeze on family reunions for settled refugees who did not have a permanent home, aimed at easing the backlog in housing.

Earlier in December a court in Haarlem ruled that a Syrian woman’s right to be reunited with her children took precedence over the government’s need to manage the accommodation crisis and ruled that the temporary ban breached both Dutch law and European guidelines.

And in October, refugee agency Vluchtelingenwerk won a case in which it argued that the standard of accommodation for asylum seekers in the Netherlands breached international standards. The court ordered the government to take immediate action to improve the situation, but ministers successfully appealed against that part of the ruling.

The talks at the Catshuis on Tuesday are not expected to lead to any major policy changes, but the four parties will look for common ground on one of the deepest fault lines in the coalition.

The conservative groups VVD and CDA have long lobbied for a more restrictive migration policy, designed to reduce the number of asylum seekers arriving in the Netherlands.

VVD backbenchers triggered a mini-crisis in November when they threatened to vote against a bill proposed by their party colleague Van der Burg which would allow the government in The Hague to force local authorities to accommodate refugees.

Rutte flew back from the COP27 climate summit in Egypt to quell the rebellion in his party’s ranks, promising that the deal would be balanced by measures to reduce the number of refugees at the border but without making any firm commitments.

The other two coalition parties, D66 and ChristenUnie, favour a more humane approach to asylum and say any changes to border policies will have to be agreed across the European Union.

ChristenUnie leader Gert-Jan Segers said the cabinet also needed to look at other migration issues, such as the exploitation of labour migrants in greenhouses and slaughterhouses.

Up to 55,000 refugees are expected to arrive in the Netherlands this year. Van der Burg said last month that there were enough accommodation places available in the short term, but the issue is likely to raise its head again in April when temporary facilities Amsterdam, Dronten and Velsen with 4,000 beds are closed.