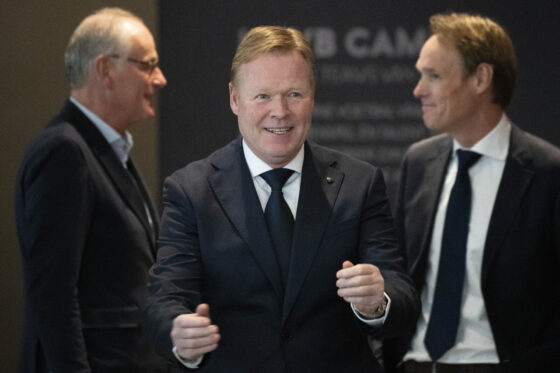 Ronald Koeman says he wants Oranje to return to their classic 4-3-3 formation after taking up the reins as national men’s team coach for a second spell.

The 59-year-old praised Louis van Gaal for reaching the quarter-finals of the World Cup in Qatar, but acknowledged that the team’s style of play had been criticised as too defensive.

‘Not losing in the last 20 international matches is amazing,’ he told NOS. ‘There was a lot of criticism of the way they did it, and I felt like they could have done things differently here and there.

‘So my starting point is to do things a bit differently from how they went during the World Cup.’

Koeman said he had tried the 5-3-2 formation used by Van Gaal and Frank de Boer at the last two tournaments, but found it created problems for his players. ‘You often have a man over at the back and short handed in other areas,’ he said.

At his introductory press conference in Zeist, Koeman said he had felt surprised and ‘honoured’ to have been approached for the job last February, after Van Gaal announced he would retire at the end of the World Cup.

He spent two and a half years as coach of Oranje from February 2018 to August 2020, guiding the team to the Nations League final and qualifying for the Euro 2020 tournament, but left to take up his ‘dream job’ of managing Barcelona.

Just over a year later he was sacked following a poor run of results, as the Catalan club struggled with financial problems that forced them to sell their star player Lionel Messi to Paris Saint-Germain.

‘After Barcelona I was done with coaching for a while, with the huge pressure every day and all the difficulties that come with it,’ Koeman said.

‘[But] I’ve missed the experience of going to a finals tournament as national coach. I enjoyed two years I had with the group of players so much, concentrating on football and making preparations with your staff.

‘I’m a football man. Doing nothing wouldn’t suit me. I’ve been given another chance and I think that’s great.’