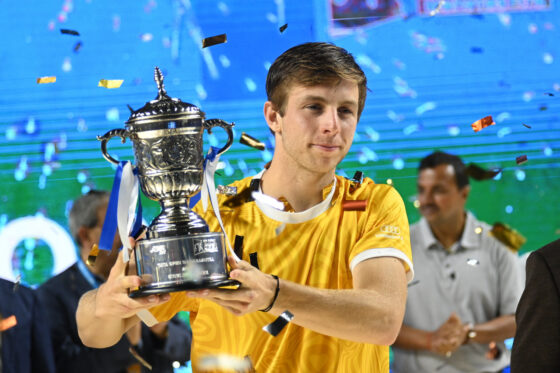 Tallon Griekspoor shows off the trophy in Pune. Photo: AFP

Tennis player Tallon Griekspoor has climbed 34 places in the world rankings following his first ATP Tour victory at the weekend.

The 26-year-old from Haarlem defeated Frenchman Benjamin Bonzi in the final of the Maharashtra Open in Pune, India, on Saturday, in three sets to become the 12th Dutchman to win on the professional tour.

Griekspoor’s ranking of 61 will give him a boost heading into the Australian Open, which begins next week.

‘Nobody probably expected this,’ Griekspoor said after his victory, ‘But I’ve had a very good period in training. It feels very good to start the year like this.’

Griekspoor’s highest ranking of 44th came last August, buoyed by first-round victories at the French Open and Wimbledon, but a slump in form in the second half of the season brought him back down to 95th place.

Botic van de Zandschulp, who went out in the second round in Pune, remains the highest ranked Dutch men’s player at 34th, one place higher than last week.

Tim van Rijthoven, the previous Dutch ATP winner in Rosmalen last year, is ranked 106th and will be hopeful of qualifying for the Australian Open this week, along with Gijs Brouwer, ranked 162nd.

Arantxa Rus is the highest-ranked Dutch women’s player at 113th. She is one of four players from the Netherlands attempting to reach the first round in Melbourne in this week’s qualifiers.