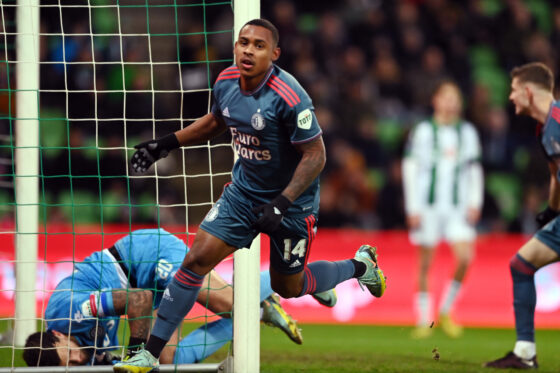 Feyenoord stretched their lead at the top of the Eredivisie to four points with a convincing 3-0 win at Groningen as Ajax and PSV both drew for the second week running.

The only other team in the top five to win, AZ Alkmaar, moved up to second place, a point ahead of the big two, after beating Heerenveen 2-0, while Twente Enschede remain in touch following their goalless draw in Amsterdam.

The results mean Feyenoord will top the table at the halfway mark even if they lose to Ajax in De Kuip in Sunday’s top-of-the-table clash, while a win would open up an eight-point gap over the defending champions.

Igor Paiaxão headed Feyenoord into the lead against Groningen in the 18th minute, before the outstanding Orkun Kökçü curled in a shot from outside the area with half an hour gone. Santiago Gímenez glossed the scoreline with a third in second-half injury time.

AZ came away from Friesland with all three points thanks to a flashing header by Dani de Wit after 32 minutes and a tap-in by Tijjani Reijnders just 25 seconds into the second half, while Hobie Verhulst, whose place is under threat with the arrival of Australian national goalkeeper Mathew Ryan, saved a penalty at the other end.

Ajax were booed off the pitch at the Johan Cruyff Arena by their own fans in the wake of a 0-0 draw against Twente Enschede that extended their winless run in the league to five matches.

Twente hit the woodwork twice in the first five minutes and played with an extra man for almost an hour after the dismissal of Devyne Rensch for pulling down Ricky van Wolfswinkel. The veteran striker had the best chances for Twente, but Ajax almost snatched a win when Kenneth Taylor pulled a shot narrowly wide in the 65th minute.

PSV looked to have done enough when they came from behind against 10-man Fortuna Sittard with goals from Xavi Simons and Ibrahim Sangaré, but were punished for missing a sackful of chances when Burat Yilmaz equalised from the penalty spot in injury time.

Volendam moved off the bottom with their second win in a row, beating RKC Waalwijk 2-1, while fellow strugglers Emmen and Cambuur drew 0-0 at the Oude Meerdijk.

The Gelderland derby between Vitesse and NEC also finished goalless, with the Nijmegen side reduced to 10 men after just 20 minutes when Oussama Tannane was dismissed for grabbing Kacper Kozlowski by the throat.

Go Ahead Eagles gifted Utrecht two goals in the first 12 minutes as Willum Thór Willumson headed into his own net and Jay Idzes’s botched clearance fell straight into the path of Sander van de Streek.

Bobby Adekanye had equalised just before with a thumping volley, and the side from Deventer snatched a point in the 89th minute through Sylla Sow to stretch their unbeaten run in all competitions to 13 matches.