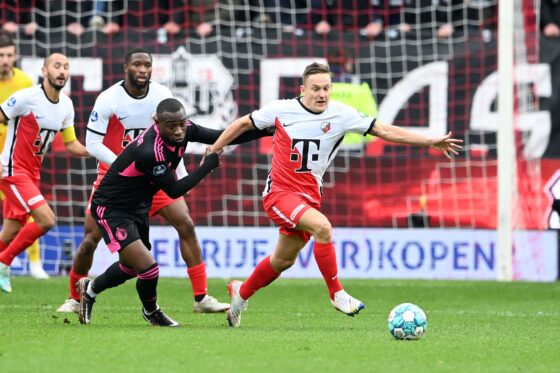 Feyenoord missed the chance to go five points clear at the top of the Eredivisie as the top three teams all drew on the first weekend of league football since the World Cup.

Feyenoord improved in the second half but had to wait until the 90th minute to equalise through substitute Alireza Jakhanbaksh’s powerful shot. They were denied a winner when Santiago Gimenez’s header in the 10th minute of injury time was ruled out for offside.

Ajax also had to settle for a draw against NEC as their former goalkeeper Jasper Cillessen performed heroics in the home side’s goal. Davy Klaassen tapped in Dusan Tadic’s exquisite volleyed lay-off to put the visitors ahead after 38 minutes, but NEC equalised early in the second half when Oussama Tannane’s free-kick set up Landry Dimata to score from close range.

PSV also dropped points in their first match since the departure of World Cup star Cody Gakpo for Liverpool. Anwar El Ghazi was recalled to the front line but was unable to find a way past Nick Olij as Sparta avoided defeat in the Philips Stadium for the first time in 13 years.

Twente Enschede were the only team in the top half to manage a win, beating Emmen 2-0 on Friday evening. Czech midfielder Michael Sadílek scored the second goal in his first match since August, after he considered giving up the game because of tinnitus.

Voldendam moved off the bottom of the table as they won the relegation clash at Cambuur. Bilal Ould-Chikh and Robert Mühren put the visitors two goals up in the first 10 minutes, before Henk Veerman added a third just 27 seconds after coming on to replace Mühren.

Go Ahead Eagles extended an unbeaten run stretching back to September to nine matches as they won 2-0 at Fortuna Sittard, while Excelsior were the other winners of the weekend, beating Groningen 1-0 with a second-half goal from Redouan El Yaakoubi.

AZ Alkmaar slipped to fifth, behind Twente on goal difference, as Vitesse Arnhem equalised three minutes from time through Mohamed Sankoh, after Vangelis Pavlidis had given the Alkmaarders the lead late in the second half.

World Cup goalkeeper Andries Noppert kept a clean sheet on his return to domestic duties in Waalwijk, but his opposite number Etienne Vaessen had an outstanding game to shut out Heerenveen in a 0-0 draw.