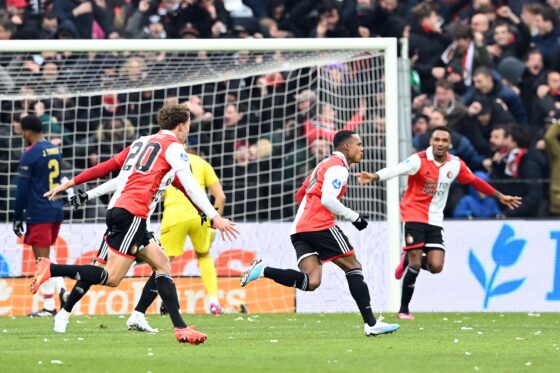 Feyenoord hold a two-point lead at the halfway stage of the Eredivisie after drawing 1-1 against Ajax in a combative match at De Kuip.

A scrappy first half was lit up by Igor Paixão’s angled shot from 25 yards to give the hosts the lead after 34 minutes. The Brazilian swapped passes with Quilindschy Hartman on the left-hand side before turning and firing past Gerónimo Rulli into the far corner.

Ajax improved towards the end of the half, with their best chances falling to Mohammed Kudus, but the equaliser came with a slice of luck.

Dusan Tadic floated a cross to Steven Bergwijn, whose skewed bicycle kick drifted back across goal to Davy Klaassen. From a tight angle the midfielder managed to bundle the ball in off the leg of Feyenoord’s Mats Wiefer.

The result extends Ajax’s winless run in the Eredivisie to six matches, their worst run of results since the 1998/99 season, and leaves them in fifth place, increasing the pressure on coach Alfred Schreuder.

Schreuder told ESPN he saw his team ‘growing’ despite the results. ‘Feyenoord were good, but I think that in the second half we saw a fine Ajax,’ he said. ‘They battled, otherwise we wouldn’t have come back against Feyenoord.’

AZ Alkmaar took full advantage to close the gap in second place with a 3-1 win at home to Fortuna Sittard 3-1. Dani de Wit gave the Alkmaarders a flying start when he headed home in the fourth minute, and although Burat Yilmaz equalised from the spot soon after, an own goal by Ximo Navarro and Vangelis Pavlidis’s glancing finish sealed the points.

PSV ended their own three-match winless streak against Vitesse Arnhem to stay in third, three points behind the leaders. Luuk de Jong’s weak penalty in the first half was held by Kyell Scherpen, but early in the second half Guus Til’s shot crept under the goalkeeper’s hand and inside the post.

FC Twente moved up to fourth place as they stretched their unbeaten run to eight matches with a 2-0 win over Utrecht. Vaclav Cerny profited from a defensive blunder to give Twente a well deserved lead on the stroke of half-time before Virgil Misidjan took advantage of a quick throw-in to slide the ball past Vasilis Barkas.

Sixth-placed Sparta are just two points behind Ajax after a 3-0 win at Cambuur Leeuwarden that leaves the Friesland club three points adrift at the bottom. Tobias Lauritsen gave the Rotterdam side the lead after nine minutes with a shot from outside the area, before Koki Saito’s first Eredivisie goal and a penalty by Vito van Crooij completed a comfortable win.

Groningen went into the ‘derby of the north’ at Heerenveen on the back of four straight league defeats and a cup exit at the hands of the amateurs of Spakenburg. They were 1-0 down after four minutes when Amin Sarr escaped his marker and slipped the ball past the advancing Michael Verrips.

Groningen equalised shortly before half-time through Florian Krüger, but a thumping header by Pelle van Amersfoort restored the lead eight minutes from time before Sarr slid in Mats Köhlert’s precise cross for the third.

Groningen remain level on points with Volendam, whose mini-recovery ended with a 2-0 defeat at Excelsior, and Emmen, who lost 3-1 at NEC thanks to two goals by the outstanding Landry Dimata.

The match between RKC Waalwijk and Go Ahead Eagles was postponed because of heavy snow.