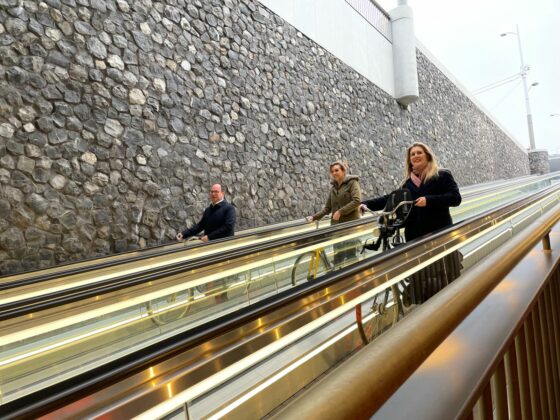 The halls are flooded with light, bike racks stretch as far as the eye can see, and embedded in the walls and ceilings are works of art tracking Amsterdam’s watery past.

Two new bike parks underground – and under water – at Amsterdam Centraal are no ordinary, grubby station facilities. Local and national government have invested €85 million in an extraordinary feat of engineering which will help 11,000 cyclists take the first or last mile of their rail journey by pedal power.

The parks, the largest in the Dutch capital, are intended to make onward transport ‘seamless’ for some 200,000 plus travellers using the station every day. Half of them come by bike, according to infrastructure junior minister Vivianne Heijnen. Parking will be free for the first 24 hours, then the cost is € 1.35 a day – and, thanks to smart systems, bikes left unattended for 28 days will be removed.

‘We are in an oyster and the pearl is inside,’ said Hans de Koning, managing director of construction company Max Bögl Nederland, which realised the Wurck architects’ design.

‘This was like open heart surgery: now it is underwater, but it was partly built on land. The architect was inspired by the environment surrounded by water and under the water.’

In order to minimise the risk of damaging the North-South metro line and nuisance and traffic in the inner city, the two new garages were partly pre-fabricated in the western harbours of Amsterdam. The water in front of the station was drained in order to lay one, and the other was carefully sunk into the IJ-side – with space left underneath for the fish and marine life. 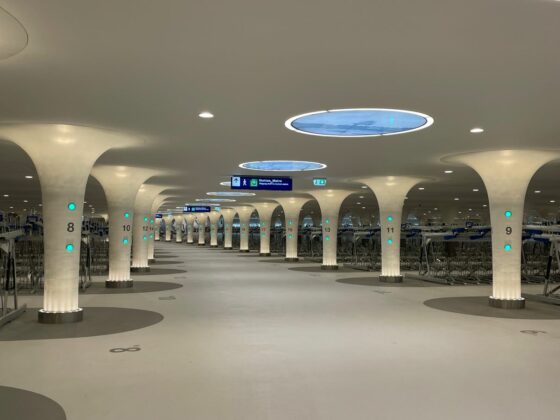 Steven de Visser, technical manager at  Van Hattum en Blankevoort contractor said that the technique on the IJ-side – which opens in February – was a first. ‘For the first time, we built three big tunnels in the harbour on land, brought them here and sunk them,’ he told Dutch News. ‘This has never been done before. It stopped the risk of damaging the North-South line, and it saved thousands of transport rides.’

Melanie van der Horst, infrastructure chief at Amsterdam council, said that the city hopes the four-year development will solve both the problem of finding a bike space and a wilderness of bikes parked every which way above ground.

‘Before, there was never a bike space to be found, bikes everywhere, but now you know that if you cycle to Central you will have a space and can go straight to your train,’ she said. ‘For years, this was a building site, but now there is so much space for people to walk around.’

Wouter Koolmees, director of the NS railways, was full of compliments for the building, with its light wells, recycled stone, and inbuilt artworks reflecting Amsterdam’s history with the water. ‘The bike is very handy for the last mile of your journey,’ he added, ‘and we will manage and take care of the bikes.’

The underwater chamber on the city side, open this week, has space for 7,000 bicycles – although not for mopeds or cargo bikes, which will still have to find space above ground. It incorporates two, 12-tonne sgraffito artworks by late artist Lex Horn and other art chosen with the help of Amsterdam Museum.

By 2029, in line with the expected growth of the city and demand for public transport, the city will look at building another 8,500 spots.

There is one mayor issue, however, admits Edwin Bollema, commercial project manager at the NS. ‘Above the racks are row numbers and you see which row you are parked in,’ he says. ‘But you need to remember it!’