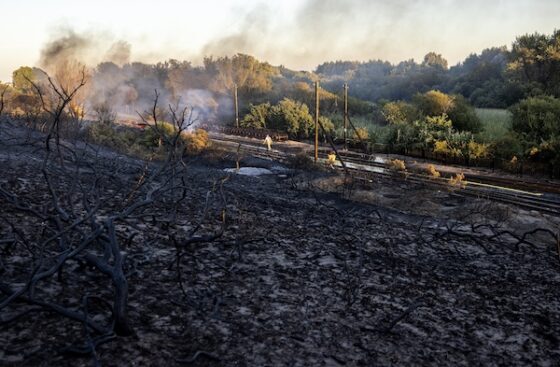 Uncontrollable heath and forest fires caused by global warming will lead to major damage in the Netherlands unless action is taken, experts said on Monday.

Fires will become more frequent and almost impossible to control during periods of drought because of dry vegetation, experts at the KNMI weather bureau, Wageningen University, Deltares and the Dutch public safety institute NIPV have said.

In a densely populated country like the Netherlands, where nature, homes, agriculture and the rail network are situated close together, a fire could have a devastating effect on vital infrastructure, such as power lines and substations, they said.

‘We have been confronted with serious drought already. Heat and drought reinforce each other. Climate change is rapidly progressing and the risk of heath fires will be greater,’ NIPV researcher Hans Hazebroek told broadcaster NOS.

Possible measures could include taking the risk of fires into account when planning infrastructure, and a re-evalution of how to handle fires that burn out of control.

‘We have to think about situations when a fire just can’t be controlled. At some point water is no longer the solution,’ Hazebroek said. In addition investment will be needed to strengthen the fire service, he said.

‘The Delta [flood defence] plan has stood us in good stead,’ fire brigade chief Anton Slofstra said. ‘We now have to do something comparable, not to protect us from water but from fire. We have to think ahead and make perhaps radical changes to the landscape.’

A multi-layered plan of measures that strengthen and reinforce each other could be an effective approach to fires, he said. Adapting nature takes time so we have to start now,’ Hazebroek warned.