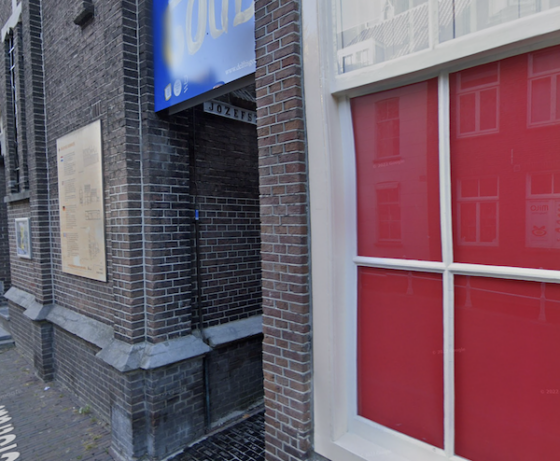 The plaque showing the ‘old’ house and the new option with red blinds, captured on Google Streetview

Tourists who have had their picture taken in front of Vermeer’s home in Delft may have unwittingly snapped his neighbour’s house instead, new research has suggested.

Some historians now say the sign marking the celebrated artist’s house is very likely to be the wrong place. Vermeer did not live on the corner of the actual church but in a small – and picturesque – house one door and one alley to the left.

The whereabouts of Vermeer in Delft have been the subject of research by museums in the last few years, including the Rijksmuseum, which is to host the biggest exhibition of Vermeer’s work to date. The museum dedicated a podcast on the subject on Friday.

In 1881 Vermeer was thought to have resided on the Oude Langendijk, then, 40 years later, the Jozefstraat v/h Molenpoort seemed the more likely place. Finally, in 1968, the corner of what is now the Maria van Jessekerk became Vermeer’s official abode.

Not everyone is convinced that Vermeer’s change of address – Oude Langendijk 25 – is the final one, as interpretations of historical sources differ.

‘Houses didn’t have numbers in those days. You had to make do with vague descriptions such as ‘next to the corner and in such and such an alley,’ Rijksmuseum senior curator Wieneke ’t Hoen, who helped produce the podcast told the AD.

For the research into Vermeer’s house, experts delved into the official documents to find a mention of which corner the house was on and the number of fireplaces it had. After years of research the pieces of the puzzle – including the place where Vermeer’s wife used to hang up the washing on sticks – were painstakingly put together to reveal the current house.

Stichting Vermeer director Herman Weyers said it can never be confirmed if the house in question really is the one. ‘We can’t go back to the 17th century directly.  But it doesn’t really matter, we don’t need to know everything,’ he said.

That is not the opinion of a number of museums, who in the year dedicated to Vermeer, are doubling their efforts to add to the small but growing store of knowledge about the master painter.

Recent archive research, for instance, has shown that for an impoverished painter Vermeer was given a lavish funeral, perhaps paid for by his mother in law Maria Thins.

The question Vermeer lovers and researchers are now left with is who the current owner of the house is. Its red window blinds have been down for years, locals said, and attempts to contact the registered owner have come to nothing.

Weyers has rung the bell many times, he said. ‘It’s either empty or home to a recluse,’ he said.