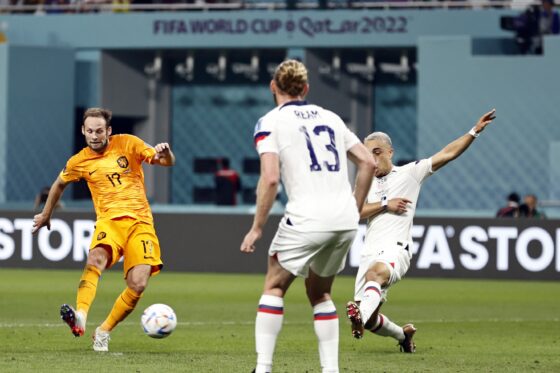 The Netherlands survived a second-half scare by the United States to move into the quarter-finals of the World Cup in Qatar with a 3-1 victory.

Memphis Depay and Daley Blind scored their first World Cup goals for eight years to put Oranje 2-0 up at half-time, but the plaudits will go to Inter Milan’s right-back, Denzel Dumfries, who set up the first two goals and then fired in the third just as the USA were threatening to get back on level terms.

Louis van Gaal opted for the same starting line-up as in the final group match against Qatar, with Ajax’s Jurriën Timber at right-back and Cody Gakpo up front alongside Memphis, with Davy Klaassen in the holding role.

The US started brighter, with Andries Noppert turning away a short by Christian Pulisic with his foot after just three minutes.

But after 11 minutes Oranje went ahead with their first attack. A precise, patient build-up of 20 passes from the back ended with Denzel Dumfries squaring the ball into the penalty area, where Memphis turned it in on the penalty spot.

Dumfries was again instrumental in the second goal, as a throw-in on the right came back to him on the edge of the penalty area and his low cross was put away by Blind.

The Americans were unable to break through a resolute Dutch defence in the first half despite having 63% possession, while Oranje scored with their only two shots on goal.

Van Gaal brought on Steven Bergwijn and Teun Koopmeiners for Klaassen and Marten de Roon for the second half, while the USA replaced Jesus Ferreira with Giovanni Reyna.

The USA came closest to scoring after half-time when Weston McKennie fired a shot from the edge of the area over the bar, while at the other end Walker Zimmermann almost turned a Dumfries cross into his own net.

After 76 minutes their enterprise was rewarded in bizarre fashion when Pulisic’s cross flicked off the foot of Haji Wright and looped over a stranded Noppert into the goal.

But American hopes were snuffed out five minutes later when Blind’s surgical pass picked out the advancing Dumfries in the penalty area and the right-back dispatched an unstoppable shot from close range.

Van Gaal immediately replaced the tiring Memphis to give PSV’s 19-year-old winger Xavi Simons his first international cap, as the Dutch played out the rest of the match without incident.

Captain Virgil van Dijk struck a relieved note after the game. ‘We scored two fantastic goals, what more do you want?’ he told NOS. ‘I’ve no idea how their goal went in, but we found a way to keep fighting and that says everything about this team.’

But Van Dijk said there was still room for improvement, particularly in possession. ‘We’re critical because we can play great football and we want to show it. But we’re in the quarter-final now and we want to recover and get ready for a good contest.’

Oranje’s quarter-final opponents on December 9 will be Argentina, who beat Australia 2-1 in the second round of 16 match on Saturday evening.