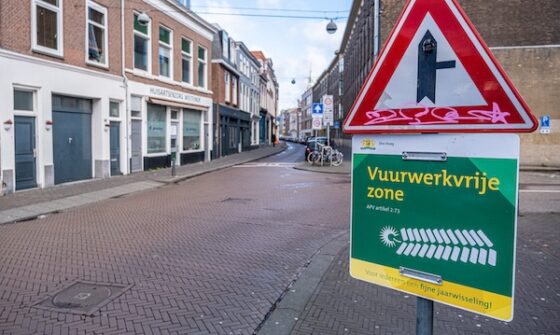 The police have seized a record 671 tonnes of illegal fireworks in the run up to the New Year celebrations so far, according to government figures.

A year earlier, when fireworks were banned because of the coronavirus restrictions, police confiscated almost 206 tonnes.

This year’s record is mainly due to two massive hauls over the German border at Enschede, which totalled 550 tonnes.

Police spokesman Peije de Meij said there are real concerns about the huge volume of illegal fireworks now in the Netherlands, but that it is ‘practically impossible’ to stamp them out.

‘If fireworks again cause injury, misery and damage, as the police, we can only continue to insist on a national ban,’ he said.

Firecrackers such as cobras and rockets have been banned since 2020 and several towns and cities, including Amsterdam and Rotterdam, have banned all but children’s fireworks from the streets this year.

De Meij said the police will be out in force on December 31, with riot squads, dog handlers and arrest units on standby and the police will also use drones where possible. Drones ‘allow us to see very quickly where something is about to happen and to take action, De Meij said.

Last year, according to government figures, 773 people (most of them under 20) had to go to a doctor or hospital for treatment because of a firework-related injury.