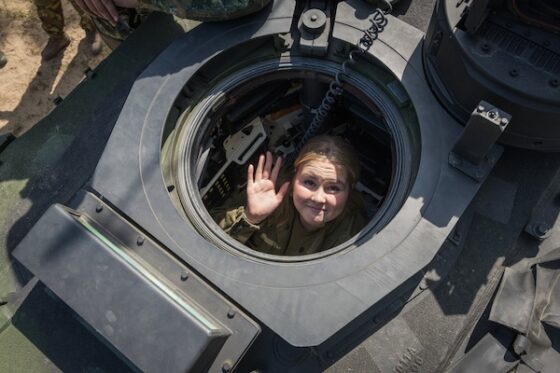 Amalia in a tank during a visit to the armed forces. Photo: Defence ministry

The heir apparent to the Dutch throne turned 19 on Wednesday, celebrating in private according to tradition.

The oldest daughter of King Willem-Alexander and Queen Máxima is currently studying Politics, Psychology, Law and Economics at the University of Amsterdam. But she has been forced to live at home, with her parents announcing in October that she can’t leave the house because of credible threats from organised crime.

‘That has enormous consequences for her life,’ Queen Maxima said at the time. ‘That means that she doesn’t live in Amsterdam and can’t really go outside. It’s not a student life for her like other students have. I’m really proud of her how she keeps up with all that. I honestly am.’

Amalia may not be too sad to put her 18th year behind her. In addition to security concerns, her entry into adulthood started with a coronavirus scandal after it was revealed by De Telegraaf that her 18th birthday party broke Covid rules concerning the number of people allowed to gather in one place.

Reports say there were about 100 guests at her garden party instead of the recommended four. King Willem-Alexander eventually admitted that ‘on reflection, it was not good to organise this.’

She also had to cancel her gap year travel plans because of Covid.

Amalia will never become commander-in-chief of the Dutch army, as other royals sometimes do, but Dutch soldiers will one day have to swear allegiance to her as queen. During her gap year, Amalia became acquainted with the Dutch army, air force and navy. She’s also flown in an F-16 and piloted a submarine.

Amalia is also the first royal woman who can possibly be conscripted into military service, with the House of Representatives deciding in 2018 that conscription should also apply to females.

Amalia’s 19th year may be off to a better start, with her first official royal trip planned for early next year when she’ll visit the Dutch Caribbean islands with her parents. King Willem-Alexander has just commissioned an independent report into the role of the Dutch royal family in colonial history.