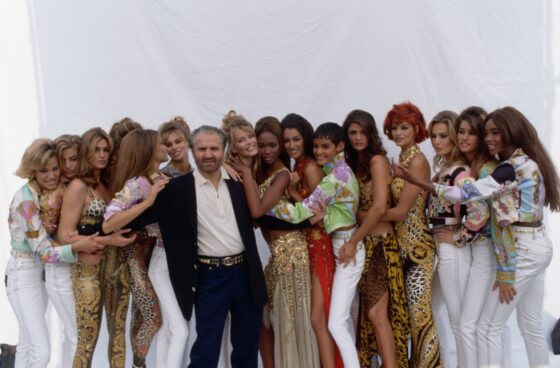 His designs were flashy and extravagant, even vulgar in the eyes of some critics, but couturier Gianni Versace’s unmistakable brand became a byword for luxury, and a go-to for glamorous A-listers.

Opening at the Groninger Museum on Saturday is Gianni Versace Retrospective, the biggest ever exhibition of the Italian fashion designer’s work. Taking up two floors of the futuristic building designed by Versace’s contemporary Alessandro Mendini, the retrospective charts the many influences on Gianni Versace (1946-1997), ranging from Greek Antiquity and Roman togas to Pop Art and bondage, and shows how Versace’s commercial savvy set the fashion industry on a new path.

‘In each room, you get a completely different picture and feeling, as if there were twenty different designers,’ Andreas Blühm, director of the Groninger Museum, told NPO Radio 1 on Thursday. ‘He was permanently reinventing himself.’

Private collections and the museum’s own archives account for most of the exhibits, but two of the show’s highlights have been shipped in from New York’s Metropolitan Museum of Art.

One of these is ‘that dress’: the revealing black gown held together by gold safety pins worn by Elizabeth Hurley when she partnered Hugh Grant at the Four Weddings and a Funeral premiere in 1994. The other, the bejewelled ‘Diana dress’, will be familiar to many from the cover of Harper’s Bazaar, printed shortly after Diana’s death in 1997.

Elsewhere in the exhibition, we see gold jewellery emblazoned with the iconic medusa logo, adopted by the brand in 1993, and an ‘army’ of the shiny silk shirts in bold prints that became a favourite of hip-hop artists such as Tupac and Puff Daddy. The more-is-more furnishings of Versace Home (founded 1994) are also offered a place, providing a flavour of the designer’s famously flamboyant private residences.

A centrepiece of the exhibition is a catwalk showcasing key pieces from Versace’s iconic Freedom fashion show of 1991. It was this show that helped spawn the supermodel era, with Naomi Campbell, Claudia Schieffer, Christy Turlington, Linda Evangelista and Cindy Crawford all walking the Versace runway and affirming the brand’s place at the axis of the fast-moving fashion world.

Stars adored Versace’s daring designs and the party scene that surrounded the label. His love of animal prints, metallics and vivid jewel colours perfectly matched the excesses of the eighties when his label was founded, but it was a world away from his modest upbringing as the son of a dressmaker in the impoverished toe of southern Italy.

‘He was an extraordinarily good marketeer,’ says Blühm. ‘He was very aware of how to use celebrities to strengthen his brand.’ A-listers were ushered to the front row of his fashion shows where the press once sat, and Versace built up an illustrious inner circle which included Elton John, Madonna and Princess Diana.

The glitterati came to Versace’s side again in 1997, when at the peak of his success, he was gunned down by a spree killer in front of his Florida mansion. The funeral was one of history’s most star-studded.

In looking back over his career, Gianni Versace Retrospective demonstrates, above all, how the designer’s pioneering approach has shaped the fashion world of today. ‘I am not interested in the past,’ Versace once said. ‘Except as the road to the future.’

Gianni Versace Retrospective is at the Groninger Museum until 7 May 2023.