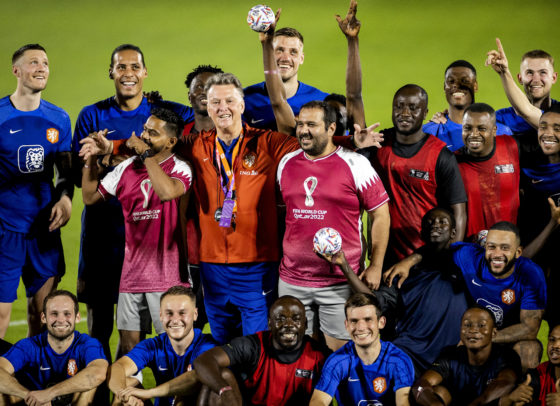 The Oranje squad had a training session in Doha with migrant workers. Photo: ANP/Koel van Weel

The low-key build-up to the World Cup reflects the widely held belief that FIFA blundered in awarding the tournament to Qatar, a country with no footballing pedigree, a climate that requires the matches to be played in mid-season and a woeful human rights record.

But for the Dutch team, the competition is the first chance for many of the current generation of players to star on the World Cup stage, after they failed to qualify for Russia four years ago.

Hopes have been tempered by injuries to key players and the sense that the team is still in development, after two qualification failures and an early exit from Euro 2020 at the hands of the Czech Republic.

On the other hand, the Dutch have been handed a favourable draw, with group matches against Senegal, Ecuador and host nation Qatar. Hopes were raised further this week with the news that Bayern Munich’s Senegalese striker, Sadio Mané, will not be fit for the opening match on Monday evening.

Assuming they win Group A, Oranje will face a team from England’s group, which also includes Wales, the USA and Iran. But progressing beyond the last 16 could be tough, with Brazil, Argentina and Spain all potentially in the same half of the draw.

Statistics bureau Gracenote calculates the Netherlands has a 7% chance of lifting the World Cup trophy for the first time in their history. Only Brazil (20%) and Argentina (16%) have better prospects, although the sting in the tail is that Gracenote predicts the Dutch will meet Argentina in the quarter-finals.

UK bookmakers rank the Netherlands among the stronger outsiders – a group that also includes Germany, Portugal and Belgium – with odds of between 10/1 and 14/1 against, while Brazil are 7/2 favourites.

Much will depend on whether veteran coach Louis van Gaal can marshal his resources as effectively as he did eight years ago, when a similarly makeshift team exceeded expectations to reach the semi-finals.

Even Van Gaal toned down his customary self-confidence when asked about his team’s prospects in Qatar. ‘We don’t have the best players in the world, but I believe in teambuilding and tactics. I believe we can go a long way, but we will need luck as well.’

In 2014 Van Gaal presided over a blistering start to the tournament, steamrollering Spain, the team that beat Oranje in the 2010 final, 5-1 in the opening game and following up with wins against Australia and highly-fancied Chile.

The devastating counter-attacks of Arjen Robben, Wesley Sneijder and Robin van Persie were key to the team’s success, although their challenge ran out of steam in the later stages. By the time a weary Oranje lost on penalties to Argentina in the semi-final, they had failed to score or concede a goal in four hours of football.

A key factor in the Netherlands’ success in 2014 was the squad’s high level of fitness, so the number of players arriving in Qatar nursing injuries or lacking match practice has to be a concern.

Memphis Depay, Oranje’s leading goalscorer in recent seasons, has not played since suffering a hamstring injury in the 2-0 win against Poland in the Nations League in September.

Even though Depay completed a full training session this week, Van Gaal says he is not fit enough to start against Senegal, where Vincent Janssen of Royal Antwerp will line up at centre-forward, though Depay is likely to feature at some stage.

Depay’s Barcelona team-mate Frenkie de Jong has had his season interrupted by injuries and an uncertain spell when the club considered selling him to Manchester United to reduce its wage bill.

The good news for Van Gaal is that De Jong is back in the starting 11 at Camp Nou and has been instrumental in the team’s recent run of form that has taken them to the top of La Liga.

There are also concerns about two of Oranje’s Italian-based players, Atalanta midfielder Maarten de Roon and Internazionale midfielder Denzel Dumfries. Dumfries appears to have recovered from a recent knee injury, which will be a boost for Van Gaal, who values his high work rate and ability to switch from defence to attack.

Another concern is the underperforming Ajax side, who are supplying seven of the 26-man squad. The league champions have won just one of their last five matches and shipped 16 goals in a dismal Champions League campaign, capped by a 6-1 thumping at home by Napoli.

Goalkeeper Remko Pasveer and defender Daley Blind were seen as particularly at fault during the Napoli debacle, Steven Berghuis has only shown flashes of the form he displayed at Feyenoord, and reserve midfielder Kenneth Taylor is another injury worry.

One of the biggest talking points in the build-up to the tournament has been the position of goalkeeper. The omission of the experienced Jesper Cillessen, now at NEC Nijmegen, surprised many commentators, but not as much as the decision to call up the Heerenveen shotstopper Andries Noppert.

Van Gaal says Noppert is the only Dutch goalkeeper in form, but he is untried at international level, while both Pasveer nor Feyenoord’s Justin Bijlow have been unconvincing this season.

The Dutch will hope to be lifted by the return of their captain, Virgil van Dijk, whose absence was keenly felt during the 2-0 defeat by the Czech Republic last summer. Van Dijk is expected to play in a back three with two of De Ligt, Ajax’s Jurrien Timber and Manchester City’s Nathan Aké.

De Jong and Berghuis will form the creative hub of the midfield, with Blind moving out of central defence to the left flank and Dumfries on the right. Koopmeiners and Davy Klaassen are alternative options, especially if Van Gaal opts to pack the midfield.

Up front, Janssen will play as an orthodox centre-forward until the more mobile Depay is ready to come on, with PSV’s Cody Gakpo and Steven Bergwijn of Ajax operating across the front line. There could be cameo roles for the dependable Luuk de Jong or Noa Lang, who has flourished since moving from Ajax to Club Brugge a year ago, or even PSV’s quicksilver 19-year-old, Xavi Simons.

Reaching the quarter-finals will count as success for Van Gaal, but the 71-year-old coach would like nothing better than to round off his distinguished career with one last triumph.