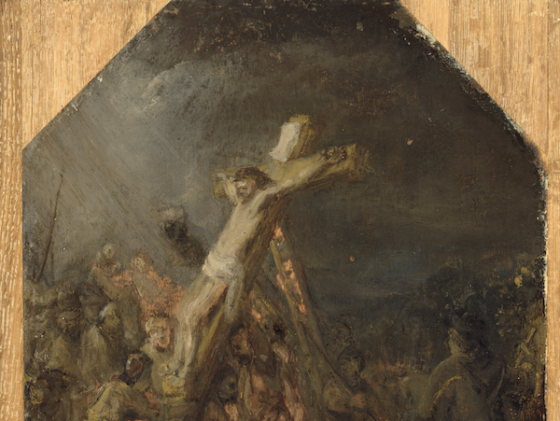 An investigation into a sketch in oils in the collection of the Museum Bredius in The Hague has concluded that the work is by Rembrandt after all, the museum has announced.

The Raising of the Cross was bought by art historian and collector Abraham Bredius on the assumption that the painting was by Rembrandt but it was excluded from his oeuvre in 1969.

From then it continued life as a 17th century copy by a follower of Rembrandt in the Museum Bredius depot.  That changed when Jeroen Giltaij, formerly of the art conservation team at the Boijmans van Beuningen museum in Rotterdam, came across the sketch while researching a book about all the works that have been classified as Rembrandts.

‘When I saw the work I had no doubts. I immediately had a strong premonitions this was a real Rembrandt,’ Giltaij told broadcaster NOS.

A subsequent clean-up of the work, which involved the removal of several layers of varnish and 19th century additions, revealed Rembrandt’s signature brushwork.

The investigation also disproved Bredius’s assumption that this had been a study for a later painting of the Raising of the Cross, which is in the Alte Pinakothek in Munich.

A dendrological probe of the wood dated the painting from between 1642 and 1645, some ten years later than the Munich painting.

The result of the investigation, carried out with the help of the Rijksmuseum, removed any doubt Giltaij may have had, he said. ‘We were quickly agreed. The sketch could only have been a Rembrandt, one that was loosely painted in oils on wood, but truly the work of the 17th-century master.’

The ‘new’ Rembrandt will be on show at the Museum Bredius from Thursday in an exhibition explaining its discovery and restoration.