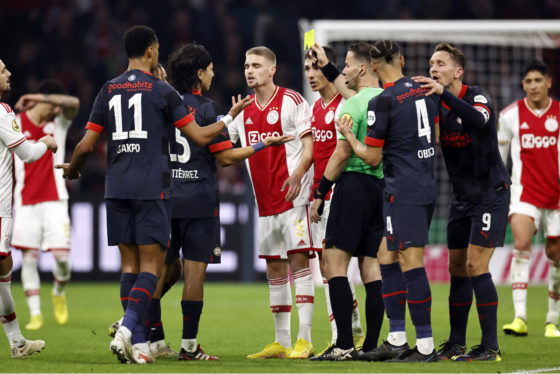 PSV Eindhoven prevailed in a bad-tempered encounter in Amsterdam to overtake Ajax at the top of the Eredivisie with a 2-1 win.

Luuk de Jong gave the visitors the lead midway through the first half when he steered in Cody Gakpo’s cross at the near post.

A second goal by Érick Gutiérrez just after the break looked to have put Ruud van Nistelrooy’s side in control, but Ajax were given hope with seven minutes left when substitute Lorenzo Lucca squeezed in a shot from close range.

Edison Álvarez missed the best chance to equalise when his header flashed wide as Ajax pressed for an equaliser, but PSV held on to claim their first league win in the Johan Cruyff Arena for seven years.

The match featured several heavy challenges and five yellow cards, and ended in a mass brawl that included squad players and coaching staff from both sides.

Ajax can regain top spot on Wednesday when they play Vitesse in a match postponed from last weekend.

‘It’s tough to win away at Ajax,’ Van Nistelrooy said. ‘We knew we would go four points behind so we needed to win to stay in contention and keep ahead of the rest of the competition, because they’re doing well.’

Ajax coach, Alfred Schreuder, did not hide his disappointment. ‘We didn’t play well, we weren’t good enough to beat PSV and we conceded some clumsy goals,’ he told NOS.

AZ Alkmaar missed the chance to go into second place as they went down to two late goals at RKC Waalwijk, both scored by former PSV prodigy Zakaria Bakkali. Just four points separate leaders PSV from AZ in fifth.

Feyenoord moved up to third with a straightforward win over bottom side Volendam, with Serbastian Szymanski providing the second with a perfectly placed low shot from outside the penalty area.

Twente also dropped points as they conceded a last-minute penalty at home to Go Ahead Eagles, after Ricky van Wolfswinkel had put them ahead with a spot-kick in the first half.

Emmen moved four points clear of Voldendam at the bottom as a Richairo Zivkovic goal earned them their first win of the season.

Veteran striker Lasse Schöne celebrated his 400th appearance in the Eredivisie in style as his long-range strike was enough to secure NEC’s first win since August at second-bottom Cambuur.

Heerenveen took the points at Excelsior thanks to a superb goal by Milan van Ewijk, as he cut in from the right and unleashed an unstoppable shot past Stijn van Gassel.

Utrecht came back to win 2-1 against Groningen for their third win in a row. Groningen said before the game that they had withdrawn defender Paulos Abraham from the squad until after Christmas because of ‘serious threats’ triggered by local news reports that his dog fatally bit a chihuahua.