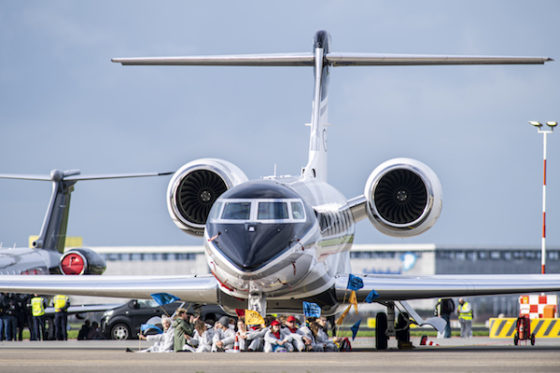 Border police now say they arrested 413 climate activists who climbed fences and chained themselves to private jets at Schiphol airport earlier this month.

The police originally spoke of 200 arrests but the true figure is more than double because some cases were only officially registered later, a spokesman told broadcaster NOS. All those arrested have since been released from custody.

The protestors, from Greenpeace and Extinction Rebellion, targeted part of the airport where private jets land and take off. Some of campaigners sat under the jets and others chained themselves to the planes outside the VIP terminal.

Once the police investigation has been concluded, the files will be passed to the public prosecution department which will decide if any of those arrested should be taken to court or fined.

The paperwork is ‘considerable’, given the large number of arrests, the spokesman said. ‘We are taking about vandalising the fences and possibly some of the jets,’ he told NOS.