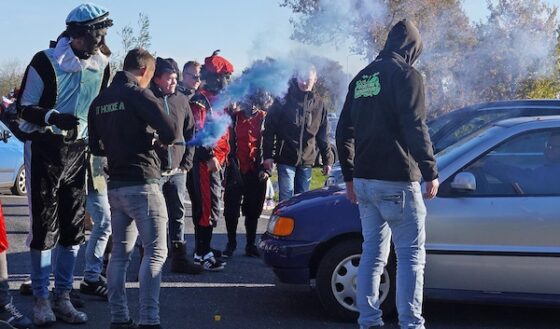 Overijssel police have launched an investigation into Saturday’s trouble outside the Bible Belt village of Staphorst, which led the mayor to cancel a demonstration by anti-racism campaigners during the annual Sinterklaas procession.

Riot police were drafted in after a mob of pro blackface locals blocked roads to try to stop the demonstrators reaching the village. Although blackface Piets have largely disappeared from bigger Dutch towns and cities, they are still a feature of the Sinterklaas celebrations in more rural areas.

One of the cars which was stopped was carrying observers from Amnesty International which warned a week ago that the right to demonstrate in the Netherlands is under threat.

Amnesty International’s Gerbrig Klos, one of three people in the car that was attacked, said she had felt extremely threatened by the pro blackface group.

‘We were surrounded and attacked by dozens of people,’ she told the AD. ‘They were out to frighten us and stop us reaching the village. They kicked the car, threw eggs and an oily substance at us. My car has dents, the number plate and windscreen wipers have been ripped off and the back tyres were let down. They made it impossible for us to do our jobs.’

The police said in a statement on Monday that no one has yet been arrested but that several formal reports had been made about threatening behavior, vandalism of a car and theft.

Camera footage of the trouble is now being studied and the police have appealed for witnesses to come forward.

‘The police regret that the demonstration had to be cancelled,’ the statement said. ‘The right to demonstrate is a greater good in the Netherlands.’

Justice minister Dilan Yesilgöz said on Twitter she was shocked at the way KOZP demonstrators were attacked. ‘You have the right to demonstrate for whatever you want,’ she said. ‘But you must never silence others with violence or intimidation.’

The minister said she awaited the results of the police investigation in ‘full confidence’.