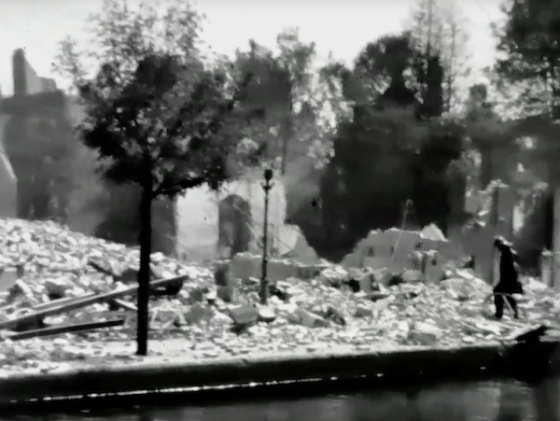 A screenshot from the film

Previously unseen footage has turned up showing unique images of the aftermath of the bombing of Rotterdam on May 14, 1940.

The 8mm film was found among material left by film maker Joop Stolk, who died in 1995. Stolk, who belonged to a film makers collective in Rotterdam, continued to film during the war but ultimately went into hiding from the Nazis in Heerenveen.

The film in question was probably not made by Stolk but it was discovered among his things,  Bas Romeijn, who specialises in the digitalisation of old films, told broadcaster NOS.

‘You can see the smoke rising from the rubble so it must have been filmed not long after the bombs hit the centre,’ Romeijn said. ‘I think it must have been shot on a Sunday because people are not working and are kitted out in their Sunday best.’

The five minute film, which has been handed over to the Rotterdam city archive, shows the devastation of several locations in the city centre.

‘What caught my attention was the ‘disaster tourism’ aspect of it and how people are walking around in a daze. They look totally perplexed,’ Romeijn said.

Rotterdam was bombed by the Luftwaffe four days after the German invasion. The centre was left completely devastated and over 1,000 people lost their lives, forcing the Dutch government to surrender a day later, on May 15.