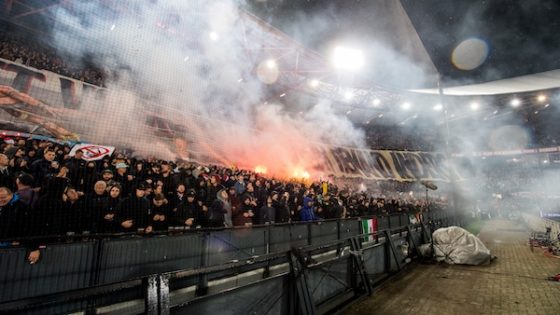 Feyenoord has been banned from taking fans to the club’s first away game in the next round of the Europa league, following disturbances at two matches in the group stages.

European football body Uefa has fined the Rotterdammers €50,000 for ‘crowd disturbances, lighting of fireworks, throwing of objects and acts of damage’ during the Sturm Graz game.

The Rotterdammers have also been banned from selling tickets to its away supporters for two games, although the second ban is probationary for two years.

The club has been fined a further €56,000 after its fans blocked public passageways and threw fireworks and other objects on the pitch during a home game against Lazio.

In addition, Uefa ordered the partial closure of Feyenoord’s stadium during its next European home game. The North stand is where the club’s die hard fans congregate.

Last season Feyenoord faced similar sanctions for problems with its supporters on and off the pitch.

Feyenoord is one of four Dutch clubs still in European competition. PSV Eindhoven have been drawn against Sevilla in the play-off round for the Europa League, while Ajax will play Union Berlin. AZ has qualified for the Conference League knock out rounds.