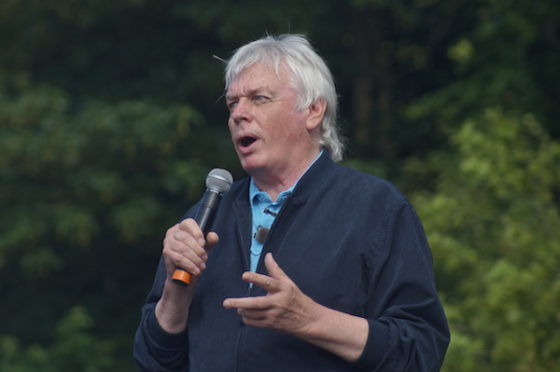 The cabinet has decided to ban British conspiracy theorist David Icke from the Netherlands because he is a threat to public order, government sources have told RTL Nieuws.

Icke, who believes the world is governed by shape-shifting reptiles – when he is said to really mean Jews – was due to speak at a rally in Amsterdam on Sunday.

The decision to ban Icke was taken because of the ‘unrest’ which the invitation had generated, and following consultations with the police and the counter-terrorism unit NCTV, RTL said.

Icke had been invited to speak by Samen voor Nederland which has organised the demonstration, ostensibly to protest about the way the ‘interests of the Dutch people are being subjugated to the European dictatorship’. The protest is supported by a number of conspiracy theorists, far right politicians and Covid-deniers.

Amsterdam city council had asked the IND if Icke could be banned on public order grounds and had already said the rally would be moved from the Dam in the city centre to Museumplein. Three counter demonstrations are also being organised.

The Netherlands rarely bans people from entering but has refused several imams with reputations for encouraging violence.

In 2017 Turkish foreign affairs minister Mevlüt Çavusoglu was banned from visiting Rotterdam following fears that his presence would create tensions within the Dutch Turkish community.