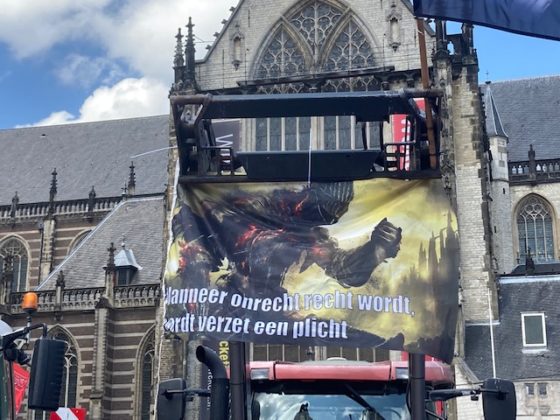 A poster at an rally in Amsterdam calling for ‘resistance against injustice’. Photo: DutchNews.nl

Jihadism remains the biggest threat facing the Netherlands but the rise of far right extremism and radical anti-government and conspiracy movements could also spill over into violence and terrorism, the Dutch counter terrorism unit says in its latest report.

‘A group of anti-government extremists is targeting the government and other institutions based on fundamental mistrust, anger and sense of injustice,’ the agency said.

This group, the NCTV said, rose out of a radical undercurrent during the coronavirus protests and is increasingly focusing on other topics, such as the nitrogen issue and the farmers’ protests.

‘A movement is emerging that is characterised by deep hostility, fanaticism and fantasies of violent vigilance,’ the agency said. ‘Followers spread a so-called elite narrative… and say this elite should eventually be held accountable in tribunals.’

Some of them, the agency said, embrace conspiracy theories which undermine public confidence in democratic institutions. ‘The dissemination and normalisation of such theories can give rise to extremist and even terrorist acts,’ the government agency warned, referring to threats against politicians and public health institute chief Jaap van Dissel.

Neverthelesss, radical Islam remains the biggest threat in the Netherlands, the agency said. But the government’s ‘repressive approach’ is proving reasonably successful and ‘not only is the movement not growing, but it is less active,’ the NCTV said.