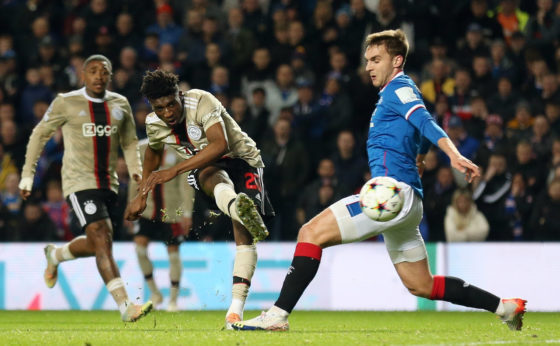 Ajax bowed out of this year’s Champions League competition with a convincing 3-1 win over Scottish side Rangers FC.

The Amsterdammers, who were already eliminated after losing home and away to Liverpool and Napoli, took an early lead in Glasgow when Steven Berghuis chipped the ball over Allan McGregor from close range.

Mohammed Kudus doubled the lead before half-time when he stroked home Owen Wijndal’s pull-back for his fourth goal of the campaign.

Kudus looked to have scored a third early in the second half when he put away a superb cross by Devyne Rensch, but the video referee spotted he had strayed marginally offside.

James Tavernier scored a late penalty to give the home side hope, but it was almost immediately extinguished when substitute Francisco Conceiçao ran on to a pass by Dusan Tadic and fired the ball past McGregor for Ajax’s third.

The only blot on coach Alfred Schreuder’s copybook was an injury to Wijndal when he ran into an advertising hoarding early in the second half. The left-back, who is hoping to join the Netherlands’ World Cup squad later this month, will undergo a scan on his ankle on Wednesday.

Ajax will drop down to the Europa League after Christmas, a move Schreuder said was disappointing but an accurate reflection of their current level. ‘We deserve this place,’ he said.

The coach said he was pleased with his team’s performance at Ibrox. ‘The first half was outstanding. We could have scored more. Before the game we wanted to score an early goal, that helped us on our way.’

His opposite number, former Dutch international and Feyenoord manager Giovanni van Bronckhorst, was left to reflect on a campaign that yielded no points and a goal difference of minus 20, the worst set of results ever by a team in the Champions League group stages.

‘It was a disappointing game. The only time we felt we could get something out of it was in the last 10 minutes,’ he said.

‘It’s great that we were able to qualify, but in this group we fell well short.’