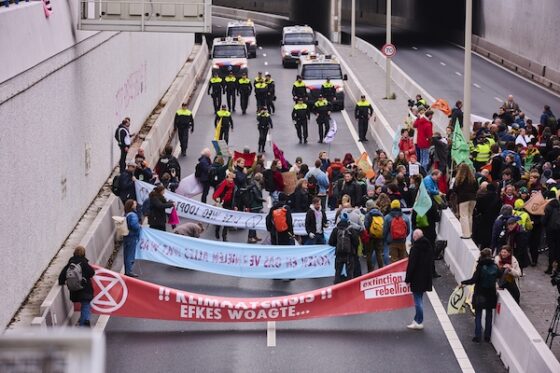 The protesters blocked the A12. Photo: ANP / Hollandse-Hoogte / Nico Garstman

The police have arrested around 150 climate activists who blocked the A12 motorway in the centre of The Hague for a time on Saturday.

The Extinction Rebellion protest led to the motorway being closed in both directions for some 90 minutes.

The group opted to protest close to the temporary parliamentary offices and the economic affairs ministry. The demonstration, they said on Twitter, was in to show their opposition to the ‘€17.5 billion in annual subsidies to the fossil fuel industry.’

Police told the group that mayor Jan van Zanen had given them the green light to demonstrate on the nearby Malieveld, close to the city’s main railway station and ordered them to move on.

But most ignored the order and sat on the road. They were then were arrested and taken by bus to the police station.

This was the fourth time that Extinction Rebellion has blocked The Hague motorway. The last time was in mid October when 62 people were picked up.