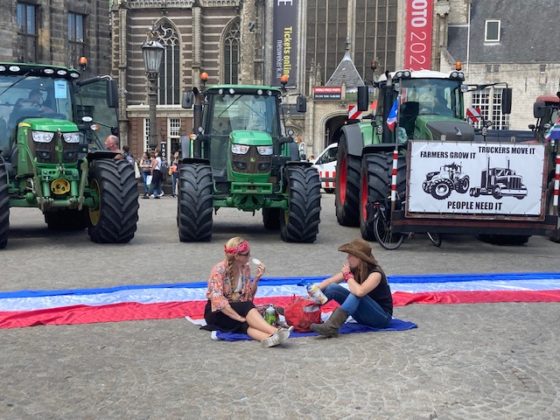 A farmers’ protest in central Amsterdam this summer. Photo: DutchNews.nl

The cabinet is adopting most of the recommendations made by nitrogen negotiator Johan Remkes last week but has described the plan to close down 500 to 600 farms and other major polluters within a year as ‘ambitious’.

Remkes said last week that the government must make sure up to 600 farms and other companies which emit a large volume of nitrogen near environmentally sensitive areas should be closed as a matter of urgency.

Ministers said on Friday they wanted to work with farmers to ensure a sustainable future for the agricultural sector. ‘We want to continue the constructive talks which took place in the summer,’ nitrogen Christianne van der Wal minister and farm minister Piet Adema said.

The deadline for halving nitrogen emissions remains 2030, but will be updated in 2025 and 2028 to check progress, as Remkes suggested, the ministers said.

The cabinet will come up with a more detailed reaction in November.

Remkes was drafted in in an effort to break the impasse between farmers’ organisations and the government after a summer of protest.

Farmers’ activists have warned disruptive protests will return if the government goes ahead with plans to force hundreds of businesses to give up in order to cut nitrogen pollution.

Members of farming lobby group LTO Nederland have given the new approach a score of 5.8 out of 10 but say they do not trust the government to carry out his recommendations.

‘Remkes is correct in saying there is a real crisis of confidence between the cabinet and the farming sector,’ chairman Sjaak van der Tak said earlier this week. ‘His advice offers a cautious way in to restore trust, but I do understand that farmers have doubts.’