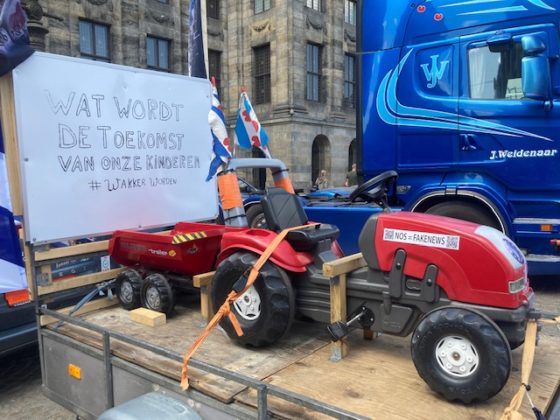 Farmers’ activists have warned disruptive protests will return if the government goes ahead with plans to force hundreds of businesses to give up in order to cut nitrogen pollution.

‘The expropriation of farmers must be taken off the table,’ Mark van den Oever of Farmers’ Defence Force said after the government-appointed negotiator, Johan Remkes, published his recommendations on Wednesday. ‘We will not allow enforced buyouts to happen.’

Van den Oever said he would wait to see if the ministerial council adopts Remkes’s plan to include compulsory purchases among its options for reducing the number of farms by between 500 to 600. Remkes argued there was no other way to meet the target of cutting nitrogen compound emissions by 50% before 2030.

The programme of cutbacks will prioritise livestock producers who are located closest to conservation areas where nitrogen emissions need to be reduced.

‘There are no longer any good routes available for the short-term approach,’ Remkes said. ‘The least bad route is a targeted closure of 500 to 600 peak polluters within a year.’

The government is obliged to limit emissions of nitrogen oxide and ammonia to comply with a Council of State ruling from 2019, which said it must act to protect conservation areas known as Natura-2000 zones.

Van den Oever, speaking after a meeting of FDF in Nijkerk, said there was ‘anger and frustration’ among his members at the prospect of being forced to sell their businesses.

‘I think Remkes has played a good role and treated all of us well, but that won’t solve the problems immediately,’ he said.

‘We have decided we will wait for the ministerial council on October 14 and see how this plays out. But as I’ve already said, if expropriations are proposed than you will hear from us very soon.’

But Caroline van der Plas, MP for the Farmer-Citizen Movement (BBB), said on Twitter that she felt ‘more hope than I’ve had in years’ and praised Remkes’s efforts.

In Gelderland, one of the provinces that is expected to bear the brunt of the cutbacks, provincial assembly member Peter Drenth said he had a list of 70 farmers who were willing to stop work if they were adequately compensated.

‘I won’t say they’re all peak polluters, but there are big companies among them,’ Drenth said. ‘The farmers aren’t stupid. They know very well what’s at stake.

‘Around the Veluwe [nature area] we have spent years pretending we can do as we please, but that’s not the case. Something really needs to happen.’