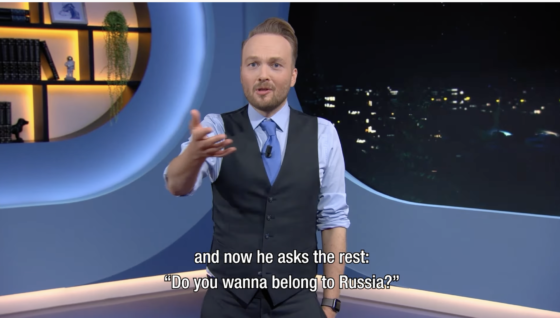 A still from the programme

A video by Dutch satirist Arjen Lubach encouraging Russians to vote to become part of the Netherlands has been watched by millions of people – and lots of viewers seem to support the idea.

The video, prompted by the forthcoming referendums organized by Russia in occupied parts of Ukraine, has also reached a Russian audience – and is circulating on Russian Telegraam groups, the AD said.

‘If he [Putin] can do it, we can do it too,’ Lubach said, introducing the clip on his daily Avondshow.

In the video, Lubach urges Russians to vote to become part of the Netherlands because of the long history between the two countries. ‘Our king Willem IV is your king as well,’ he says. ‘In 1816, Anna Paulowna, the daughter of tzar Paul 1, married Willem II, one of Willem IV’s ancestors.’

Russian nationals have been quick to support the initiative on YouTube. ‘As a Russian citizen I would definitely vote “yes” just tell me where to put my signature, time to restore the justice,’ said Viktor.

‘I’m Russian and I vote for Holland,’ said Pekta. ‘When do I get my passport?’

Another viewer pointed out that there were more links between the two countries than Lubach had mentioned. ‘You forgot to mention that the former capital of the Russian Empire was inspired by Netherlands, even the name Saint Petersburg came from Dutch. We literally have an island named New Holland here!,’ wrote Vera.

Lubach first went global with the video, America First, Netherlands Second – an introduction to the Netherlands for Donald Trump when he became president in 2017.