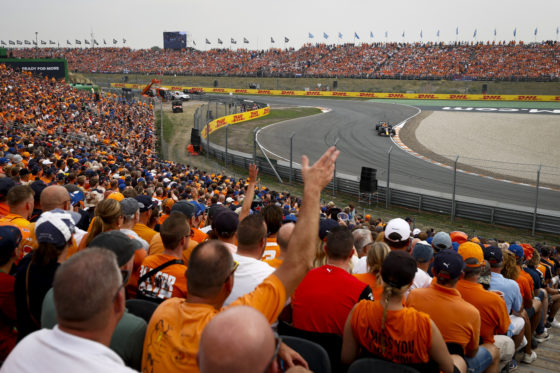 Max Verstappen won the Dutch Grand Prix for the second year in a row to send the orange-clad fans at Zandvoort into raptures and close in on a second drivers’ championship title.

Verstappen looked to be cruising to victory in his Red Bull, leading for almost the entire race, but the appearance of the safety car with 17 of the 72 laps to go briefly threatened to spoil his party.

Verstappen immediately went into the pits for new tyres and came out behind the Mercedes cars of Lewis Hamilton and George Russell. Russell also pitted for tyres but Hamilton opted to stay out, a strategy that backfired almost immediately as Verstappen overtook him within seconds of the restart.

Hamilton went on to finish fourth, behind his team-mate Russell and Ferrari’s Charles Leclerc.

The result means the Dutchman increased his lead in the drivers’ championship race over Leclerc to 109 points, having won 10 of the 15 races so far this season.

Around 105,000 fans cheered Verstappen and let off orange flares as he celebrated his second race win since Zandvoort returned to the Grand Prix calendar last year.

His father Jos was able to celebrate with him, having had to miss the ceremony earlier in the week where the king made him an officer in the order of Oranje-Nassau because of a positive coronavirus test.

‘It wasn’t a straightforward race,’ Verstappen said afterwards. ‘We had to push all the way with the safety car, but we made the right calls. It worked out really well and when we got back to the soft tyres we had great pace again.

‘It’s always special to win your home grand prix. This year I have to say I had to work even more, but it’s been an incredible weekend. Unbelievable support and I’m really happy they all came to support me.’