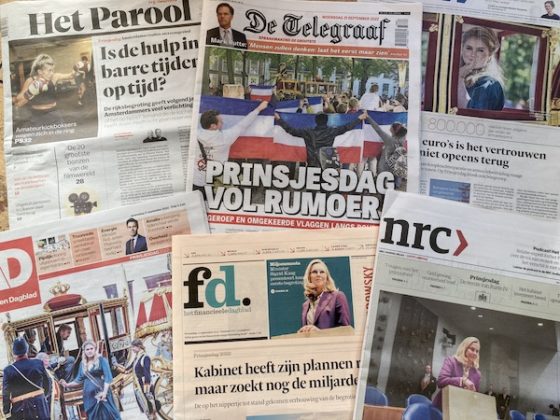 ‘Unprecedented’ is the Dutch papers’ favourite word to describe the government’s 2023 budget – in terms of both the measures ministers are planning to implement and the mood of the public.


The Telegraaf front page focused on demonstrators standing along the route of the royal procession carrying upside down flags and booing as the coach carrying the king, queen and princess passed by. The protests, the paper said, were extraordinary.

The chanting, the paper said in its editorial, marked a new low in government support and went further than ‘just a few angry farmers’.

‘Frustration in society is growing and one can only hope that by the next budget, we have a government with more vision, presence and determination,’ the paper concluded.

The Financieele Dagblad described the budget as ‘last minute and chaotic’, following the late inclusion of an energy price cap. The paper said it cannot recall another occasion in which a hastily added measure has been presented without details about the billions of euros to finance it.

‘The Council of State has been promoting a budget which was done and dusted … Now there is a completely new plan without clarity about costs or financing. And it is to be carried out by a third party: the energy companies.’

Meanwhile, and ahead of the provincial elections in March which will impact directly on the composition of the Senate, any positive effect on spending power resulting from the energy cap is already being claimed across the political spectrum, the paper points out: ‘PvdA and GroenLinks are saying it was their idea while coalition parties VVD and ChristenUnie are saying they were instrumental.’

The Volkskrant wants another insert at the bottom of the budget in the shape of a disclaimer. The big unknown is the price of gas, the paper said, and that means the measures to protect those on low incomes may not pack as big a punch as promised.

According to the NRC, the economic projections allow for a big spend, ‘unprecedented’ but perhaps not sustainable. ‘This is a paradox comparable to the pandemic when the economy did not collapse and the cabinet could offer emergency support to businesses and consumer trust did not fall.’

The cabinet then went into crisis mode and that seems to have become its permanent state, the paper said. ‘Deep pockets’ or not, the current crisis is much harder to fathom. ‘We have been nearing the edge of the precipice for months but how deep it will be is anyone’s guess.’

The king’s speech sounded like a ‘plea for understanding’ the AD said in its analysis, complete with a ‘humble’ prime minister asking for another chance to make things right.

The paper said it is ‘up to the cabinet to keep all the balls in the air’ and produce a comprehensive policy to tackle crises decisively and quickly. That, as the plummeting faith in this cabinet shows, is not something voters are convinced will happen any time soon, the paper said.