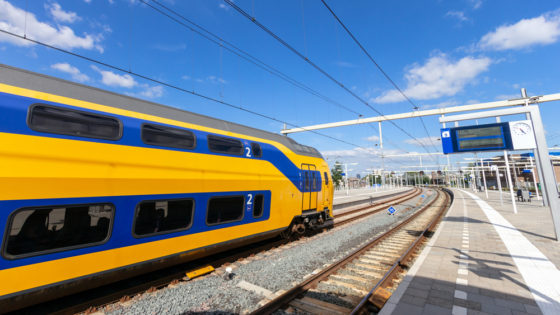 Rail operator NS has agreed a pay deal with unions worth 9.25% over 18 months, ending the dispute that triggered a series of rail strikes in recent weeks.

Further strikes planned for this week have been called off as the three unions involved in the talks published the proposed agreement on Sunday morning.

The minimum wage will be raised to €14 an hour and monthly wages will go up by a minimum of €185, meaning some employees will receive a more than 5% increase. The deal also includes improvements to pension conditions and the abolition of lower pay rates for the youngest staff.

Workers will no longer be permanently on call outside working hours, they will be entitled to two days’ additional leave, and there will be more flexibility to accommodate circumstances such as bereavement or needing to care for relatives.

The deal still has to be endorsed by the unions’ members, the FNV union’s railway branch said in a statement. ‘Whether this is a good result is obviously up to the members. We will organise various information sessions.’

FNV spokesman Henri Janssen told broadcaster NOS: ‘We don’t think we could have got any more out of it. The NS had to come a long way; these were tough negotiations.

‘We’re very happy with the deal because we don’t go on strike for fun. And it’s good for our passengers that the strikes have been scrapped.’

Bert Groenewegen, acting president of the train operator, warned that issues such as staff shortages and high workloads still present challenges for NS staff and managers.

‘This proposal will accommodate our colleagues who are concerned about the rising cost of living,’ he said.

‘Unfortunately the staff shortages mean we are having to reduce our services. All this taken together presents us with a difficult task that cannot be solved easily, but which we are fully committed to tackling and working through together.’