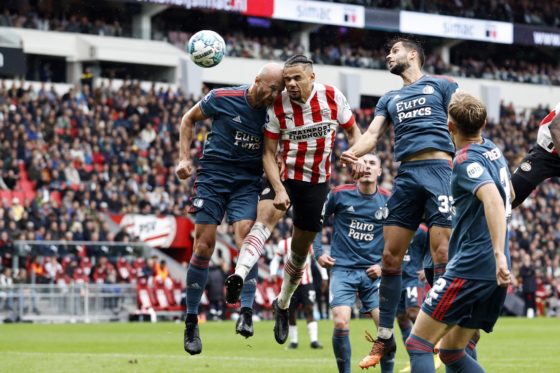 Ajax went down to their first league defeat of the season in Alkmaar to hand the initiative to PSV, who overcame Feyenoord in a seven-goal thriller in Eindhoven.

Mohammed Kudus, scorer of the equaliser at Liverpool in midweek, was on the mark again to put Ajax ahead after 11 minutes after Kenneth Taylor broke the offside trap, but Mees de Wit capitalised on a slip by Devyne Rensch to slide in the equaliser just before half-time.

Five minutes after the break Jens Odgaard caught the Ajax defence napping to collect a long pass from Pantelis Hatzidiakos and fire home from an unmarked position.

Feyenoord travelled to Eindhoven in high spirits following their 6-0 thrashing of Sturm Graz in the Europa League and took an early lead when Oussama Idrissi swept in a low shot after just three minutes.

Defender Jarrad Branthwaite and striker Cody Gakpo turned the scoreline around within 15 minutes, but just before half-time PSV defender Armando Obispo laid an equaliser on a plate for Danilo.

Two minutes after the break Guus Til turned in Gakpo’s pinpoint cross to restore PSV’s lead. Justin Bijlow made several fine saves as PSV tried to seal the win, but after 72 minutes Orkun Kökcü found the top corner from outside the area to level the scores.

But two minutes later Obispo headed in from a corner to seal PSV’s first league win against Feyenoord or Ajax in 16 attempts and put the Eindhoven club top on goal difference.

Feyenoord stay in fourth place ahead of FC Twente, who lost 2-1 at Heerenveen despite taking a second-minute lead when Virgil Misidjan pounced on an error by Milan van Ewijk. Heerenveen turned the game around before half-time as Van Ewijk atoned for his error before Pawel Bochniewicz headed in from a corner.

Sparta moved up to sixth after Vito van Crooij converted a hotly dispute penalty in the last minute to give the Rotterdammers a 2-1 win over Groningen.

RKC Waalwijk put five goals past Cambuur to go seventh in a match that saw the Frisian club reduced to nine players before half-time, while coach Henk de Jong was sent to the stands for protesting against the 32nd-minute penalty that allowed RKC to make the score 1-1.

The only club without a win going into the weekend, Fortuna Sittard, moved off the bottom thanks to a late goal by Rémy Vita that was enough to beat Excelsior, while Volendam ended a three-match losing streak to take a point at Vitesse and NEC drew for the fifth successive game in a goalless stalemate at Utrecht.

Two goals by Norwegian striker Oliver Edvardsen, who celebrated with his trademark double backflip, gave Go Ahead Eagles a 2-0 win against Emmen to send the club from Drenthe to the bottom of the table.