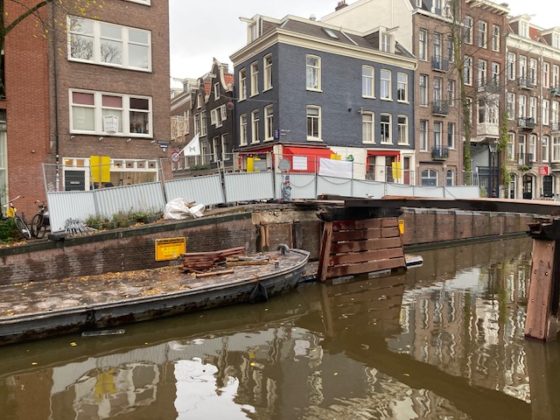 Amsterdam does not know how many claims for private damage have already been made as a result of its two-decade, multi-billion project to repair 200 kilometres of canal walls and hundreds of bridges that have been allowed to decay.

The city was alerted to the dangerous state of many of its waterways and bridges in September 2020, when a 20 metre section of 150-year-old canal wall collapsed in the city centre near a university building.

An investigation published last year found that although the wall was owned by the university, some of the affected area belongs to Amsterdam city, and damage was partially caused by passing (tour) boats on the Oudezijdsvoorburgwal canal. The university is understood to expect the city to pay for some of the repairs and restoration, which will cost at least €1.1 million.

However, private households in Amsterdam have also begun to report damage as extensive stretches of canal wall and roads are dug up and bridges are repaired.

Amsterdam council confirmed to Dutch News that it has had claims from citizens regarding bridge repairs, for example ‘people getting stuck on a nail’ or for nuisance due to detours when roads are closed. Companies and the self-employed can also claim for damages if they are disadvantaged and suffer, for example, loss of turnover.

In a response to questions, the city said that it had all risks insurance (CAR) to cover damage to private properties and businesses – which might include problems with foundations, leaks and cracks – during the bridge and canal wall repair project.

‘It is not always clear whether damage was always present before the start of construction work,’ said a spokesperson. ‘With this in mind, it is necessary to do a professional building survey [first] on buildings that are in an affected area, in order to refuse possible unjustified claims but also better determine the extent of the damage.’

Only unforeseen and genuine damage, the municipality confirmed, will be covered by its insurance.

Daan Wijnants, VVD councillor and spokesman on major repairs, stressed the importance of monitoring the impact on private homes and businesses – after the example of extensive private damage caused by building the North-South subway line.

‘It is of course important that damage is properly monitored and when it occurs, it must be compensated by the municipality,’ he said. ‘My understanding is that the municipality is insured for this, but with a large project such as the bridges and canal walls, this will have to be organised especially well.’